After the bouncy task ended on a heated note for Rubina and Sidharth, the two continued their war of words on Saturday too. The argument was over the duty of chopping vegetables after Nikki denied to help. Abhinav and Rubina were adamant that they won't be doing the chopping as they are spending hours in the kitchen to cook meals. On the other hand, the housemates got a chance to decide whether Nikki deserves the title of 'confirmed' contestant. 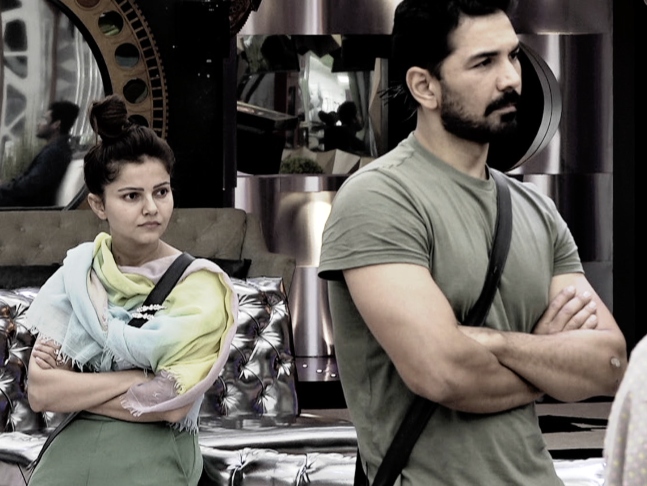 - The episode began with Rubina-Abhinav vs Sidharth-Gauahar argument. Rubina and Abhinav refused to chop vegetables as he couldn't manage everything. Sidharth found it unacceptable. After much hue and cry, Abhinav clarified that he will be assisting in chopping.

- Sidharth and Rubina had another showdown after the former said she is disrespecting seniors and took a dig at her 'women power' statement. Jasmin told Shehzad that she can't be friends with Nikki and hates her for her language and overall behaviour.

- After their argument, Nikki slammed Abhinav and Rubina for throwing tantrums and called them attention seeker. Jaan, in conversation with Nikki, said he wants to rub Abhinav's face with a toilet cleaner. Nikki added that she feels like kicking him and doesn't even want to spit on him.

- Pavitra, who asked the housemates to clean the gas stove after cooking, had a major fight with Rahul. The singer irked Pavitra when he interrupted her conversation with Jaan. Rahul, amid the heated argument, went on to call Pavitra 'a villain and bully'. She asked him to not interfere when two people are talking.

- Bigg Boss announced the first luxury budget task of the latest season. As per the task, Rahul and Jaan had to host their musical concerts in the bedroom and area near the spa respectively. The other housemates had to choose which concert to attend. If they desired to exit one and go for the other, they had to cite a reason to do so. The winner would get a hamper and was permitted to share it with four other freshers of their choice. Jaan confessed his love for Nikki by singing the song his father Kumar Sanu sang for his mother Rita. With the maximum audience, Jaan won the task and shared his hamper with Nikki, Eijaz, Nishant and Shehzad.

- Bigg Boss then asked 'freshers' whether they feel Nikki deserves to be called a confirmed contestant or not. She had to convince them that she deserves to be a confirmed housemate. Nishant and Jaan, who are Nikki's friends, asked her to change her attitude. Jaan said she is no more rooted and isn't behaving in the right manner. He went on to call her egoistic. However, this didn't go down well with Nikki. She argued with Nishant for not being a true friend and guiding her when she went wrong. Rubina, Abhinav, Jasmin and Shehzad felt Nikki doesn't deserve to be a confirmed contestant. Pavitra and Eijaz voted in favour of Nikki and opined that she deserves to be in the position that she is in.

- Rubina took a firm stand against Nikki and got into a heated argument with Nishant. She said that though the freshers are pointing out flaws in her, they don't have the guts to say that she isn't deserving. Seeing Rubina and Abhinav stand against her, Nikki went to convince them. However, they refused to change their opinion.

- In the end, the housemates couldn't arrive at a decision and Bigg Boss announced that Nikki will continue as a confirmed contestant. Hina appreciated the way Rubina fought and put forth her opinion. Gauahar and she said Rubina can become the winner of the season. However, Sidharth disagreed.

- Pavitra and Rubina had a small argument. The former called Nikki a sweet person while Rubina disagreed and expressed it with her facial gestures.

- In the garden area, Nikki had a fight with Nishant and Jaan for not being her true friend and correcting her when she went wrong. The episode ended with Nikki saying she doesn't want to be friends with Jaan in particular.

Bigg Boss 14 Promo: Rahul Vaidya calls Pavitra Punia a ‘villain and a bully’ as they get into a heated conversation

Bigg Boss 14: Sara Gurpal in a new video accuses Sidharth Shukla for her elimination; his fans slam her for baseless accusations

Bigg Boss 14 Day 13 Highlights: Sidharth Shukla gets into a war of words with Gauahar, Hina and Rubina as Jasmin Bhasin beats Nikki Tamboli in bouncy task