Vidya Balan is all set to take the audience into the world of mathematics and numbers with Amazon Prime Video’s Shakuntala Devi. The biographical film based on the life of human-computer Shakuntala Devi is much-anticipated. Now, as the Anu Menon directorial is a day away from its global premiere, fashion enthusiasts can’t help but wait to take some clothing inspiration from the film.

Vidya, who has a great personal collection of sarees, is seen donning Indian as well as western outfits in Shakuntala Devi. From pinks to maroons, oranges and pastels, the actress has left the fashion police curious to recreate them for their next outing post the pandemic. Painting the olden world charm perfectly, National Award winner Niharika Bhasin, along with hairstylist Shalaka Bhosle and makeup artist Shreyas Mhatre has indeed weaved magic with the look that enjoys creative liberty but doesn’t side-track the reality.

Ahead of Shakuntala Devi’s premiere on July 31, PeepingMoon.com spoke to Niharika, Shalaka and Shreyas and learned about what went behind making the film authentic and fashionably stunning. 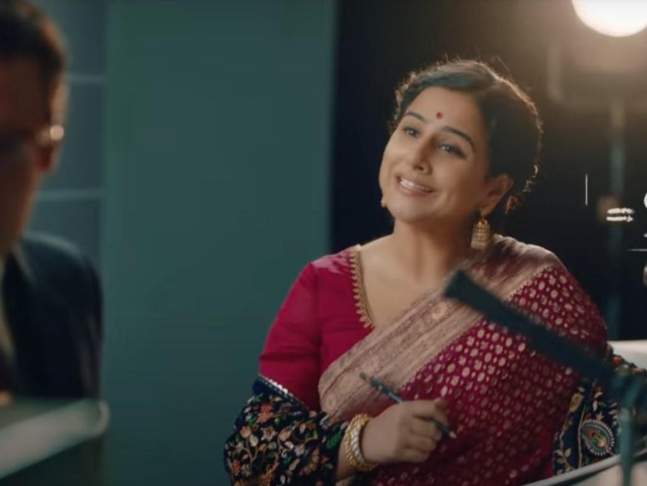 What was the character sketch provided for Vidya's looks by the team/director?

Niharika:  In case of a biopic, you are studying who the person is to have a better understanding of how her story goes. The costume also follows a story but if you are following the costume’s story, then it defeats the purpose of the film because costumes have to flow with the story. We didn’t get an absolute character sketch of Shakuntala Devi because it’s a biopic. It was just the script and the real character.

Shreyas: I had to refer to the original character i.e.  Shakuntala Devi.

What were the reference points? Did you model Vidya's looks on Shakuntala Devi's old photos or took creative liberty?

Niharika: Our reference points are always the time, the decade, what is the fashion of the time and the economic status of the person. This follows into the space you are in and the personal style you are trying to build. Shakuntala, when she goes to London, meets people and is influenced by the city, space and tries to change into western clothes. The reference point is looked at in conjunction with the script.

Not all photos of Shakuntala Devi were referred to as we didn’t have many of them.  I always take creative liberty. You have to follow reality but also make it cinematically beautiful.

Shalaka: Finalizing the look of Shakuntala Devi for the film was teamwork -- Starting with costume, hair and makeup. I pulled out some references from various sources. Yes, we did take some creative liberty as reel and real characters are different, so we have to work accordingly.

Shreyas: I went through the old photos and then worked on Vidya's face. I tried to create similarities. 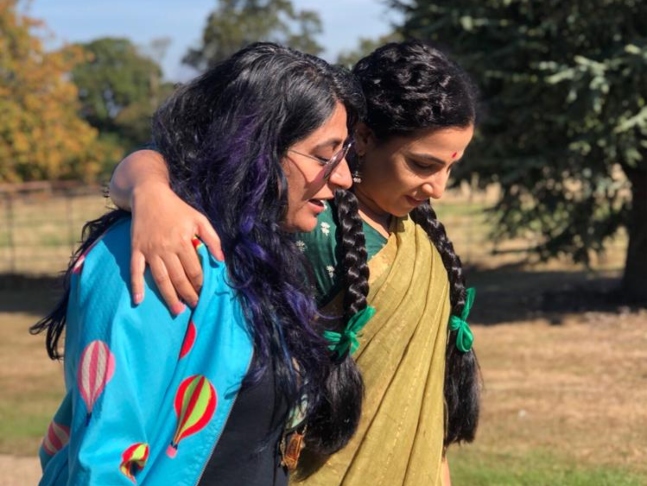 The clothes are cover 60s-90s era. Did you use any original clothing/accessories from Shakuntala Devi's closet?

Niharika: No, we didn’t use any original clothing from Shakuntala Devi’s closet but did use it from my mother’s closet.

Shalaka: No, we didn’t use any original accessories from Shakuntala Devi’s closet.

Is it difficult to design 5 looks for one character? How do you make sure there is a different approach yet the essence remains the same?

Niharika: When you designing an entire film, it's not difficult to design five looks for one character. But putting yourself into the space of the film, it is difficult. You have to make sure nothing is out of place. The minute it jars, the space is gone. You have to use your creative license and colours to differentiate between decades.

Shalaka: It was challenging rather than difficult I would say. Vidya is very flexible when it comes to set the look for the film character, so it got smooth to try different hairstyles on Vidya. In the poster, 5 looks are seen but we worked on different looks from the 1940s look to the 2000s and gave different variations for different stages according to Anu’s brief.

Shreyas: As a makeup artist, it is not as difficult. Instead, it's a challenging task. The only things which change are the clothes, makeup, hairstyle, etc., but the character remains the same which retains the essence. 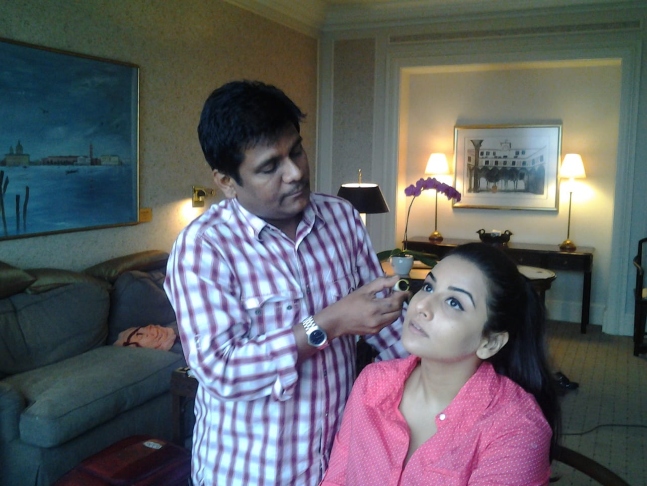 The most challenging look to put together?

Niharika: I don’t think a look was challenging. We came on board last minute. They changed the dates as I couldn’t get the film done within the time span that they had planned. When someone does that for costumes, you want to give them your best. The most challenging thing was to put the film together in the timespan we had.

Shalaka: All looks were challenging. While shooting, for every scene I tried to do a different hairstyle, like some little difference can be seen between any two looks.

Shreyas: The most challenging look was the old prosthetic look as I had to make sure it remains the way it is throughout the day. I also had to create the exact look the next day.

Vidya in sarees us unbeatable. But in her bob hairdo and western dresses, as seen in the trailer, she looks equally amazing! Any look, Vidya was not confident with?

Niharika: I’ve been lucky to work with Vidya in two biopics (The Dirty Picture and Shakuntala Devi). When you have an actor who trusts you, I don’t want to let them down. But if they don’t, you are constantly convincing them to trust you. Vidya and I sat together and made the film happen. Sometimes I felt awful as we did look tests more than what was needed. Vidya is comfortable in sarees and looks amazing too. But with the western outfits, we needed to be perfect.

Shalaka: As I said before, Vidya loves to try everything when it comes to the look of the character in any film, so it’s always easy to try any hairstyle on her and she gives you a lot for time for trials.

Shreyas: She does not agree until and unless she is completely confident about the look, the clothes, the hairstyle, etc. She is basically a perfectionist. 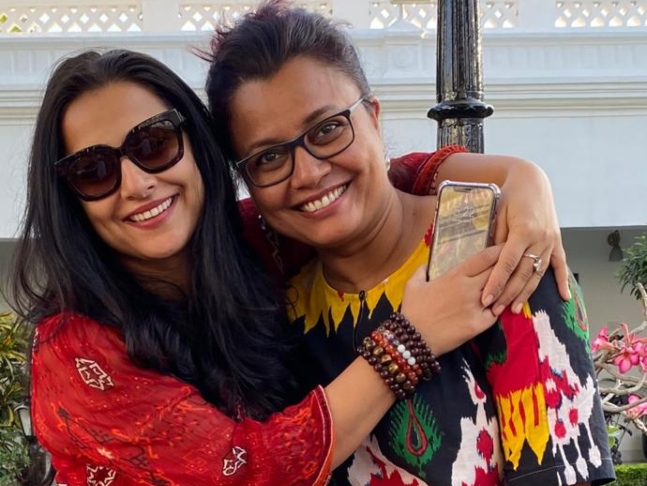 Niharika: My favourite looks are the antique sarees we got from Ranji Kelkar and a black mirror work saree from Sonam Dubal. Antique sarees have a feel to them that can’t be found in sarees today. I loved the shocking pink and green skirt and blouse we gave her.

Shalaka: It’s difficult to say which look is my favourite look. I enjoyed doing all looks on Vidya in this film.

Shreyas: My favourite look is definitely the old as well the young get up.

Niharika: The important advice while styling for a biopic is to study the person.

Shalaka: My advice will be if you are working on a biopic, do a lot of homework and research on that character, understand the character and it will be easy to work on it.

Shreyas: While shooting for a biopic, you need to understand the original character. You have to dive deep and understand as much as you can for the best results.