Advertisement
HomeTELEVISION NEWSEXCLUSIVE NEWSPeepingMoon Exclusive: Abhinav Shukla and I entering as a couple can prove to be a disadvantage for other Bigg Boss 14 contestants- Rubina Dilaik

Rubina Dilaik is no new name in the television industry. With back-to-back superhits like Chotti Bahu and now Shakti – Astitva Ke Ehsaas Ki, she proved that she can pull off any role with ease. Adding another feather in her cap, Rubina has entered the Bigg Boss 14 house with her husband, actor Abhinav Shukla. The star-couple who kept the news of coming onboard a secret till the very last minute, surely gave fans a major surprise by signing the show together.

Rubina, before joining other contestants inside the house, spoke to PeepingMoon in an exclusive interview. During the interaction, she went on to reveal that Abhinav and she were offered to show individually but came on board as a couple to challenge themselves. Stating that their personalities might help them reach the finale, Rubina signalled ‘caution’ to others as Abhinav and she are a team of two strong-headed individuals.

Have you made any strategy for Bigg Boss 14?

I’ve never followed Bigg Boss in the past. I’ve just been inside the house for a few hours as a guest. I believe no strategy is the best strategy. If you plan something in advance, you end up creating a superficial outer crust around you which will end up cracking in the first few weeks. You are constantly under camera surveillance and the nation is watching you on television. No pretence or game plan can take you a long way.

Till the time Abhinav and I signed it, we were approached individually. I always found Bigg Boss to be a loud show with controversies and arguments. I never fit into the bracket of this show. However, when the team approached us as a couple, I saw a challenge and believed that together we can add a dimension. We are two strong individuals and our personalities are so contrast that we have constructive arguments leading to interesting solutions. That’s why we decided to sign the show where we can challenge ourselves. When a project isn’t difficult, we’ll never do it.

As far as Abhinav and I are concerned, we aren’t controversial people by nature. The benefit is that we know each other well. When we have signed up for the show, we are definitely ready and the decision was taken consciously.

Taking Bigg Boss’ past records into account, personal attacks are a common thing. Is your family outside ready for it?

We have only told about Bigg Boss 14 to our parents and not friends. Our parents were of the opinion that we stand for authenticity.

There are chances that you will be pitched against Abhinav Shukla during tasks. Will it be an awkward situation for you?

It won’t be an awkward situation. We are competitive in nature and believe in healthy competition. Whenever we play board games at home, we want to give our best. It’s in our personal lives too. We won’t have a problem if pitched against each other as we will rise like contestants and not husband-wife. We know how to switch roles.

Till now, celebrities who entered with their partners never went on to win the show. Will you be able to break the past record?

I think we will. People generally believe that couples are all about holding each other’s hands, mushy love etc. We aren’t like that. We aren’t the kind of couple people imagine them to be. We are two strong individuals who happen to be together and appreciate and value each other. 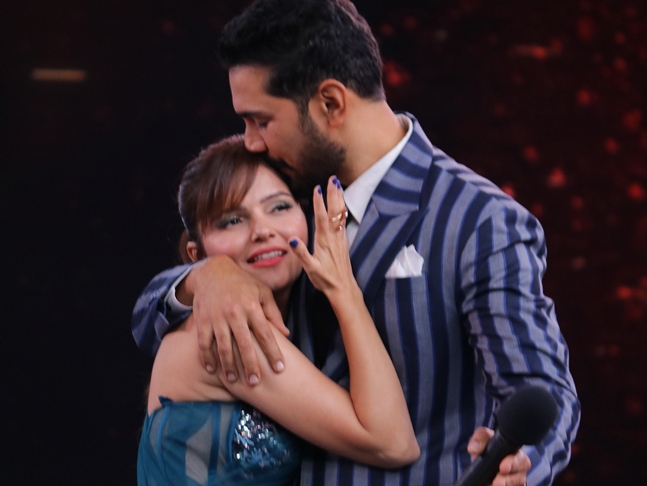 Will Bigg Boss 14 be a game-changer for you?

Career-wise, changes are already happening. It is just the way I choose to do the project. I never looked at Bigg Boss 14 as a career-changing ladder. It’s just like another project for me and not a strategized way of entering into game shows where I’ll show my ‘colours’ to get more work.

Do you see entering the show as a couple to be an advantage or a disadvantage?

It is an advantage for us as we’ll have each other’s back. It’s a disadvantage for others because they’ll see us as a team and perceive us as a threat. But in the long run, people will understand that we will be our individual selves. It won’t be that if I say something, Abhinav will agree. We have our own strong point of view. At the end of the day, we are husband and wife with mutual love and respect rooted in each other.

Abhinav and you came on board at the very last minute. What’s the reason for a delay?

After flights resumed, we went to Shimla, which is a green zone. We wanted to focus on our health and well-being. That made us take time to sign the show.