The Coronavirus pandemic brought the world to a standstill. Now, as social activities are beginning in stages after five months, Akshay Kumar along with Huma Qureshi, Lara Dutta and the team of his upcoming film Bell Bottom jetted off to the United Kingdom to start the shoot. The cast and crew of the high-end espionage thriller travelled this morning and the airport was buzzing with shutterbugs after a long break. As per reports, a chartered flight was booked for the crew. Akshay, Vaani Kapoor, Huma Qureshi, Lara and others are said to be shooting for Bell Bottom in a single schedule. It is expected to wrap in 45 days.

At the airport, Akshay was spotted with his wife Twinkle Khanna and two children-Aarav Bhatia and Nitara Bhatia. Twinkle was seen holding her little princess Nitara's hand as they entered the departure gate. While Akshay posed for the cameras happily before jetting off, Twinkle, Nitara and Aarav gave the quick photo session a skip. 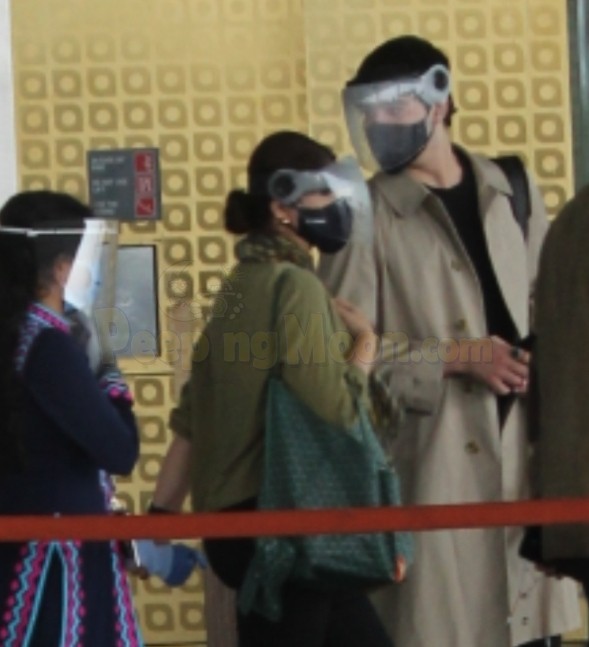 Talking about Bell Bottom and shooting for it amid the pandemic, Akshay said in a statement, "The new normal has made us realise a different way of working that none of us could have imagined. As much as I'm happy to be back on the sets, it's also important for us to take care of everything around us. Pooja Entertainment has laid down a safety plan for our shooting schedule abroad. We hope these measures help us accomplish a smooth and safe shoot."

Bell Bottom, directed by Ranjit M Tewari, is the first Bollywood film to go on floors after the lockdown. It is produced by Jackky Bhagnani's, Vashu Bhagnani's and Deepshikha Deshmukh's Pooja Entertainment in association with Emmay Entertainment. The story written by Aseem Arora and Pervez Shaikh is said to be inspired by true events.

Varun Dhawan-Sara Ali Khan make for a delightful pair as kickstart 'Coolie No. 1' promotions with The Kapil Sharma Show

Keeping up with his Sindhi genes, Ranveer Singh goes funky in the city; Ranbir Kapoor spotted striking a similar pose

AskSRK session: Shah Rukh Khan requests fans to not assemble outside 'Mannat' on his birthday

‘Khana Khaya Kya,’ asks Virat Kohli to pregnant Anushka Sharma as she cheers him during an IPL match

Bigg Boss 14 Promo: Jasmin Bhasin wails, hits herself on the sofa after a heated fight with Rahul Vaidya during task