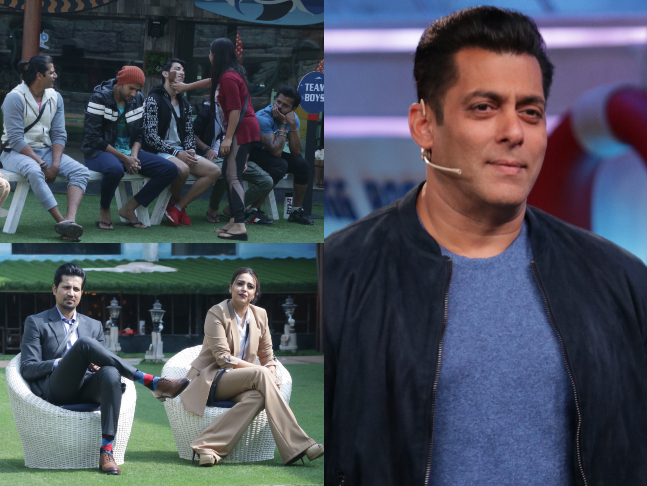 It is high time for some people in the house to get that wake up call and we all know they get one without fail from host Salman Khan every weekend. During the Weekend Ka Vaar episode, Romil Choudhary and Rohit Sunchati were rebuked by him for their sleeping habits at odd hours. Though Romil tried to use his advocate skills and tried to defend himself, Salman was armed with facts and this time he had to lose.

In fact, Rohit and and Romil earned themselves a really bad reputation amongst their fellow housemates with their aggressive ways. The two constantly have been getting voted for their disrespectful behaviour. It is not shocking to see how Surbhi and Deepak themselves have turned their backs to Romil for the similar reasons. There was a lot of drama on the weekend episode as Sumeet Vyas and Swara Bhaskar asked housemates about the times when they faced gender inequality from their fellow players. While Romil and Rohit were the popular ones amongst from the male squad in the house, Deepak and Romil blamed Dipika and Surbhi for using the woman card. To everyone's surprise, no one voted for Sree, we wonder.

Amidst all the drama, Shah Rukh Khan coming on the show to promote his film Zero brought the wave of excitement amongst the housemates and girls couldn’t wait to meet the superstar. Overall there fun and a lot of drama that happened this weekend with Salman.

Salman welcomed the audience and took them back to the family week. He said that post the family members visiting the contestants, there was a lot of improvement in the equations between the housemates. Salman went on to show snippets of what all happened when the contestants' families visited. He said that for some it was a boon and for some it was a bane. Salman was referring to Bhuvneshwari getting livid at Surbhi and Saba giving a piece of advise to Romil and Somi. He then took the audience to the time when Swara Bhaskar and Sumeet Vyas entered the house.

The duo was there to promote their web series, It's Not That Simple. Since the subject revolves around gender inequality, they asked the housemates to share their experiences, if any and were asked to put mud on the person's face who put them through that. The game created a lot of drama between the team as the person accused went on defensive foot. Somi named Rohit, Surbhi named Deepak, Deepak named Dipika and Rohit, Romil named Surbhi and Dipika, and Sree named Romil. There was an argument between Sree and Romil as the latter had named Dipika, which Sree didn’t appreciate. Swara and Sumeet bid adieu to the housemates. Post their exit, Surbhi and Romil got into an argument. She said that he purposely targeted her. Deepak also tried explaining Surbhi but she said she was in no mood to listen. Surbhi broke down and sang a brother sister song. Looks like she was missing her brother.

Salman told the audience about SRK’s visit on the show. He said that he would meet the housemates but not talk to them standing. He welcomed the housemates by sleeping on a reclining chair. Karanvir Bohra said that he looked relaxed. Salman started mocking Romil and Rohit for sleeping in the house. He picked up on Romil but he tried to get away on the pretext of being unwell. Salman said that he had been unwell throughout the show. Romil tried to defend himself hard but Salman did not leave a chance and rebuked the duo and Deepak for breaking the rules time and again. He took a dig at Romil and asked him how would he come to the stage as a finalist, standing or on a stretcher. Since Romil kept defending himself, Salman gave him enough examples which made the lawyer flat on his face. Romil went on to say that, in his opinion, Rohit slept more.

Salman then moved to the grab the bottle task. He asked the housemates for their opinion on the bottom three. There were statues in the living area and the housemates were asked to put the cutout of the faces on them.

Romil named, Surbhi, KV and Rohit. KV named, Surbhi, Romil and Rohit. Somi named KV, Rohit and Dipika. Rohit named KV, Romil and Somi. Surbhi named KV, Romil and Deepak. As the two argued over it, Salman reminded that they were once an integral part of the club. Sree named Deepak, Surbhi and Somi. Somi came in the list as housemates felt that she had been saved by her friends. He then pointed to the task again and said that everyone called Surbhi biased and unfair. He said that KV even went on to say that she was worst than Dipika and Jasleen. While KV thought he was being intelligent with his strategy, Salman made him understand that it was the worst one ever.

Salman then showed the responses that the channel got on its digital platform for the housemates. The first viewer asked Sree why is he in the show if he does not want the trophy. Sree said that it was in the earlier week but after the motivation he got from Salman and Dipika and others, he would not let his fans down. The second one asked Somi why was she on an explanation mode if she had nothing with Romil. The last viewer complained to Romil about how he badmouthed his own friends and still be good them on the face. Romil cited Surbhi’s example and Surbhi asked him to not bother to mention her. Post this, Salman too a break and showed what happened in the house. Surbhi lost her cool at Romil again and said that he was the worst person in the house and regretted sharing a special bond with him. She broke down in the corner. Somi spoke to Romil and explained him that his way of talking to people is demanding and crass. Somi tried to console Surbhi and she said that she was disappointed in Romil.

It was time for caller of the week and barely did housemates know that after all the stress, they were in for fun and surprise of the day. SRK, who will be playing Buaaa Singh in his upcoming movie Zero, posed as the caller of the day and asked funny questions. He asked Sree about all those times when he insisted for Bigg Boss to open the gate and what would happen if Bigg Boss would have agreed. Sree said that in the earlier days he would have walked out but not any more. Buaaa Singh then questioned Romil on his height. Buaaa even had a lot of fun with Salman and had the housemates and audience in splits with his sense of humour.

Salman asked the housemates if they know who Buaaa Singh is? Surbhi’s guess turned out to be wrong and Salman the revealed that it was SRK. The housemates were pleasantly surprised and a wave of excitement spread amongst them. Somi couldn’t hold her excitement to meet SRK. Salman teased her and then told the housemates that one of them would not meet the superstar as the eviction will happen today. He fooled around with Somi that she has been evicted.

Salman bid adieu to the housemates. He showed the audience the fun him and SRK had while riding to Lonavala on a bike. While SRK savoured a bhutta, the two mocked the recent shaadi season and took a dig at Karan Johar for attempting everything.

With this the show came to an end and looking at the preview, all we can say is that the fun has just begun. Keep reading this space to know what the Khans were upto and in the meanwhile, let us know who you think will get evicted this week, Rohit, Somi or Karanveer?