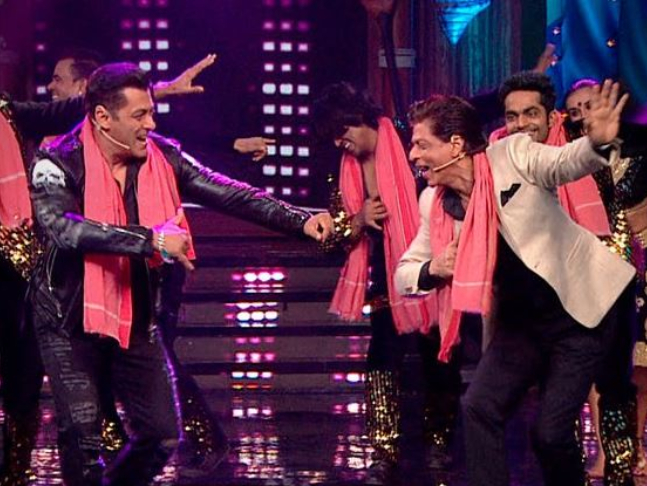 The Bigg Boss Weekend Ka Vaar was an absolute entertainer as Shah Rukh Khan joined Salman Khan on the show to promote Zero. Their camaraderie had the audience hooked and they didn’t leave a chance to tickle the funny bone with all their antics.

Here’s all that happened in the Sunday episode of the reality show with Salman and SRK:

Salman entered the show and greeted the audience. He spoke about the impending evictions in the house. After meeting the contestants, he pulled Surbhi’s leg as he was trying to cheer her up. He further played the guessing game with the contestants, and asked them to guess who made a particular statement about them. They had to put a cupcake on the face of the contestants who they thought would have said that particular statement. Most of them got their guesses wrong, but Romil Choudhary’s guess about Dipika Kakkar was bang on. Rohit Sunchati and Surbhi were the ones to receive maximum blows.

It was time for the caller of the week, who asked Karanvir Bohra about his bond with different people in the house. KV said that his bond with the housemates was strong despite arguments. Salman said that KV is one of the contestants who does not have a plan at all and he has come so far without a strategy. He was also praised by his fellow housemates, especially Sreesanth for being honest and helping towards others.

It was time for Sultani Akhada and Salman called Romil and Sree for the first round, in which the two had to prove why they were better than their counterparts. All the housemates voted for Romil. In the second round, Romil got aggressive and Sree too was tempted to do the same but he controlled. In the physical round, Romil overpowered Sree and won the Sultani Akhada.

Salman announced that SRK was all set to enter the house. SRK and Salman shook a leg on Ishaqbaazi from his upcoming movie Zero. The two then played a fun game wherein Salman asked King Khan to turn into an salesman but there was a twist to the game and SRK was not told what the product was. The first one was a bum washer and Salman asked him a questions around the product and it had the audience in spilts. SRK asked Salman to sell the next product. Considering it was a denture, SRK asked Salman since when was he using it and who all does he share this with. It further left the audience impressed with their camaraderie.

After entertaining the audience, the two met the housemates and the bunch looked too excited seeing both the Khans together. The chivalrous SRK complimented the housemates for their looks. Salman told SRK that Deepak enacted him really good. SRK asked him to perform to one of his scenes and Deepak enacted one from Om Shanti Om. SRK’s witty response made everyone laugh and he later, asked Deepak to convert his popular Hindi dialogues to English. This again turned out be hilarious. Deepak then said that he had prepared a little act for the star. Salman gave Deepak the nod and he put up a dance to his song Gerua from Dilwale. The most funny part was when Deepak colored himself with turmeric. While SRK was humbled, Salman and the others couldn’t control their laughter.

Shah Rukh played another interesting game with the housemates, wherein people had to name a zero and a hero. A zero did literally mean a zero and did not have that negative connotation to it. He started with Sree, who called himself a zero and Dipika as hero. KV called Romil zero and Surbhi as hero. Somi called KV a hero for being selfless, and Surbhi called Somi a hero. Soon after that, SRK bid adieu to the housemates.

Before leaving, SRK and Salman had another round of fun. They had to guess the question as they give answers as a clue, and if one of them was unwilling to take the question, then they would have a shot of drink. SRK revealed that he never had a girlfriend before marriage or after. Salman disclosed that he shaved when he was 17 and made other interesting revelations as well. With this, SRK bid adieu to the audience and host Salman asked him to oblige with the mandatory selfie.

Finally, it was time for Salman to get back to the house and disclose the evicted contestants name. He asked Dipika and others about their opinion. Most of them thought Rohit was safe but, soon after creating much suspense, Salman revealed that Rohit was the one who has been evicted from the Bigg Boss house. Rohit met everyone and thanked Bigg Boss for the opportunity. Dipika congratulates KV for being safe.

Post that, Romil and Deepak had a mild argument and Deepak told Romil that he won’t get provoked and give him the footage. Late in the night, KV told Deepak that housemates did not show their true self and always went overboard with their aggression. He cited Surbhi and Sree’s example.

Meanwhile, the preview showed a fight between Dipika and Sree. Will this be the end of their brother-sister relationship just two weeks before the finale? Keep reading this space to know what happened in the ticket to finale week.