Advertisement
HomeTELEVISION NEWSBIGG BOSSBigg Boss 12 Written Update Day 91: Housemates turn firefighters but only to save their own house

Bigg Boss 12 Written Update Day 91: Housemates turn firefighters but only to save their own house 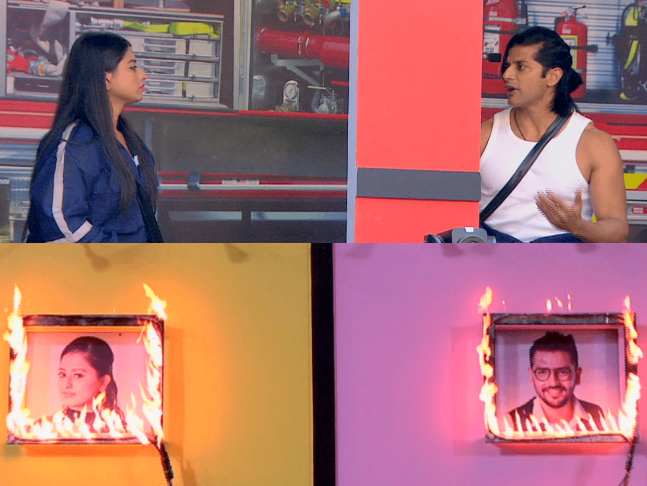 Bigg Boss house was on fire today, and we must say quite literally. The ticket to finale week kickstarted in the Bigg Boss house and the housemates turned firefighters. However, these firefighters chose to safeguard their own house from being burnt and why judge it is the second last week of the season and it is legitimate to be selfish.

As we can see a lot of strong relationships couldn’t stand the test of the time like Romil-Surbhi, Surbhi-Deepak, and Romil- Somi. The new ones to add to the list are Somi & Surbhi, Deepak & Somi and wait for the last one, Dipika and Sreesanth. Yes, the brother-sister duo seems to be having trouble in their paradise owing to Sree’s insensitive statements. Looks like she has reached her threshold.

Well, all I can say is that the pressure to make it to the finals seems to be catching up with each one in the house and it is pretty evident in the choices that they made in the ticket to finale task.

The show began with an argument between Surbhi and Romil. Surbhi was miffed with Romil to being out the old topic during the weekend task, wherein she shamed their brother-sister relationship. Surbhi asked Romil to not speak to her again. Dipika and Sreesanth were sitting in the garden when Sree said that he will not get as many votes as Dipika and KV and that Salman will be holding their hands at the finale as colors will be giving preference to them. Dipika asked him time and again to stop his rant but, Sree went on and he finally got up and walked away in anger. Dipika later went and confronted Sree that she does not like him saying all this because she too has reached this level in the game by crossing many hurdles. Sree seemed unaffected by her agony stuck to his side and Dipika walked away crying. Deepak and everyone asked her what happened but she did not say anything. Deepak came and asked Sree what had happened. Dipika spoke to KV about Sree and later KV walked in and told Sree that Dipika was very hurt with his words.

Surbhi kept talking about her the stable life before choosing to be a celeb. Sree and Dipika continued to argue and Surbhi and Somi found it funny. After a while, he went and apologized to her and they patched up. KV read out the ticket to finale task, “BB fire station.” The housemates turned firefighters and there would be two firefighters at the station at any given point. Every hour the firefighters were supposed to change. At every interval, there would be a fire alarm in the house. There were two buildings and upon every alarm, there would be photos of two contestants on the building. The firefighters would mutually decide whose house to save and whose to burn. In the end whoever got a complete cross on his picture would be out of the race. Minimum four people should be out of the race. KV & Deepak and Sree & Dipika immediately started planning their moves.

At the first buzzer, Somi and KV entered the van as firefighters. Romil told Deepak that a lot of people have betrayed him during the task and how he has always fulfilled his words. The two people whose pics were up on the building were of Surbhi and Romil. KV told Somi that he wanted to save Romil as Surbhi had said that everyone is a competition. Somi agreed and they saved Romil. Surbhi was disappointed with their choice and told Somi that she had supported her a lot and this was not expected out of her. Somi said she was playing for herself. Surbhi kept talking about it and Somi reminded her of the bus task.

Dipika walked up to Somi and told her that they wanted to go next. Somi told her that Deepak and Romil have already booked the next slot. Surbhi said that Somi was influenced by Romil and was playing for him.

Next Deepak and Romil enter as firefighters. They get Deepak and Somi’s pic. Somi asked Deepak to play for himself. Deepak saved himself and burnt Somi’s house. The four cracked a deal to shuffle between themselves and this irks Sree, Dipika and Surbhi. Sree called them unfair. Surbhi told Dipika that she would keep requesting them. Dipika got angry and said that Surbhi has also been a part of this strategy earlier and today she was feeling bad because he has been ousted by her own members. Surbhi kept trying her luck but to no avail. KV spoke to the cameras that he will play for himself for once and wanted to see how it feels to be selfish.

KV and Somi again take on as firefighters and this time they were given an option between Deepak and Romil. They saved Deepak. Surbhi and Sree continued to argue with the others to give them a chance too. Somi told KV that they should give Surbhi a chance to see what she does. Deepak and Surbhi kept arguing and Deepak said he will play for himself.

Deepak and Romil become firefighters and they are given a choice between Somi and KV. The two decided to save Somi. Next Somi and KV resumed their positions back and were asked to save between Sree and Dipika. They decided to save Sree. Romil and Deepak went in the fire station again. This time it was between Romil and Somi. Romil went into deep thoughts and this irked Deepak. He asked him to play for himself and Somi also advised him the same. After a lot of argument Romil and Deepak save Romil. She got out of the race.

Somi was angry on Romil and KV asked her to give him a silent treatment and make him realize what he did. Bigg Boss announces the end of the task for today. Sree ranted saying that he would take his revenge tomorrow. Somi asked Deepak about the same and Deepak told her that initially, the plan was to eliminate her. This made Somi angry and she confronted the same with Romil. She told him that she would play her own game from here on and does not need anyone’s support.

Romil went and confronted the same with Deepak. Deepak was upset with Romil as he did not keep to his words and eliminated her. An argument broke over this between Romil and Somi. She told them that she would play on her own now and that they should not expect anything from her. She asked Romil to not speak with her again. Somi was upset with Deepak too and he told her to not speak to him ever. With this, the show came to an end.

The ticket to finale task would continue tomorrow on the show. The preview showed Sree giving a hard time to others, did he turn his revenge mode on? It also showed KV calling him a cheater. Dipika too chose KV over him. Who do you think should get the ticket to the finale? Leave your comments below and keep reading this space to know who entered the finale week.