Bigg Boss 14 contestants Jasmin Bhasin, Nikki Tamboli, Abhinav Shukla, Pavitra Punia, Rahul Vaidya, Aly Goni, Eijaz Khan, Rubina Dilaik and Kavita Kaushik are racing towards the finale by putting forth their strong game in the house. With the nominations task this week, equations changed and fights escalated. Bigg Boss asked captain Kavita to make sure discipline is maintained. Mentioning that many rules were broken in the past few days, Bigg Boss warned the housemates to refrain from doing so.

Amid this, Kavita had a major fight with Aly. Jasmin, Abhinav and Rubina also faced Kavita's wrath who slammed everyone for playing in groups. Nikki continued supporting Kavita while the other housemates went against her. 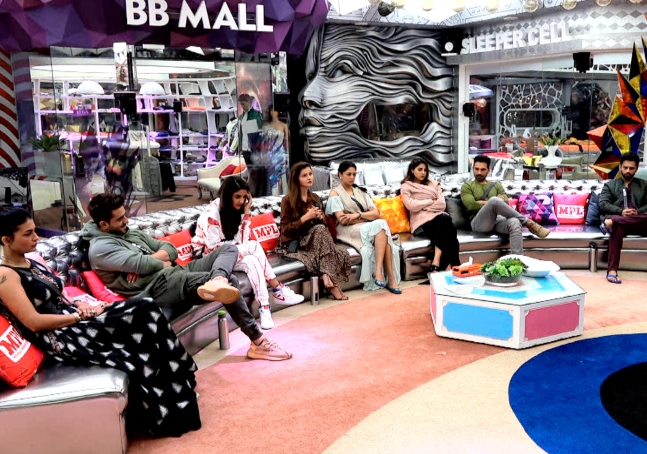 - The episode began with Eijaz and Pavitra in the kitchen. They realised that the gas stove was on and a tawa was placed on it. The next morning, they spoke to others about the incident. When it became clear that nobody kept the tawa on the gas, the housemates felt that the house is haunted. Rubina and Eijaz said they could feel some negative force around them and couldn't sleep at night.

- Jasmin and Abhinav spoke about Kavita's fake concern towards Eijaz. On the other hand, Nikki and Kavita talked about the nominations task. The former said she is happy that Kavita saved Eijaz. Moments later, Abhinav and Eijaz had a conversation about nominations. Soon, Jasmin and Eijaz had an argument. While talking to Abhinav, Rubina said that Nikki has become Kavita's puppet.

- Bigg Boss informed the housemates that some of them are violating the rules. He told Kavita to punish the one who is guilty by taking away that person's personal items. Bigg Boss said if Kavita is successful in the task, she'll get a chance to become the captain this week. Nikki told Kavita that Aly broke rules by offering chocolate to Pavitra. Without citing reasons, Kavita threw Aly's trimmer in the garbage bin. Aly took it out and refused to obey her. They get into a heated argument.

- As Aly told Kavita to state a valid reason, Jasmin interfered and the argument escalated. Nikki helped Kavita but Aly refused to let go of his personal items. The argument went out of control when Aly called her 'uneducated' and she hit back at him saying, 'main tumhari baap hoon'. Aly told Kavita to not bring in his father's name and kicked a chair. He went to the garden area and kicked the garbage bin. Kavita injured her elbow and asked Bigg Boss to throw Aly out of the house.

- Rubina tried to calm Kavita down by calling Aly's reaction 'minor'. In no time, they broke into a fight that involved Abhinav. Kavita spoke about Abhinav's relationship with her outside the house and this left the latter agitated. Rahul told Kavita that she is wrong. Nikki asks Kavita to ignore. Aly and Jasmin continued taunting Kavita. When Bigg Boss didn't intervene, Kavita took out her mic. Rubina asked Abhinav to go and talk to her. Abhinav refused and had a tiff with her over Kavita's 'friends with benefits' comment.

- Amid the argument, Kavita cried as Nikki consoled her. She said she doesn't want to stay in the house. After much wait, Bigg Boss said Aly's reaction was wrong and nominated him for eliminations for next week. Kavita further tried to put Aly's shoes in the bin. However, he defended once again.

- Kavita refused to cite a reason. This led to Jasmin, Aly and Abhinav contesting against Kavita. Aly and Jasmin sat by the door and blocked the way so that Kavita couldn't put the shoes in the bin. Abhinav supported them.

- In the garden area, Rahul asked Jasmin whether she is in a relationship with Aly. She said no. When Rahul asked whether she will be okay with Aly dating someone else. Jasmin said if Aly is happy, she will also be.

- Bigg Boss announced that the task is over. He lauded Kavita's efforts but also mentioned that she couldn't complete it. He went on to reprimand Jasmin for taking Aly's items out of the bin and schooled Abhinav for not allowing Kavita to complete the task. Bigg Boss asked Aly to keep his shoes in the storeroom and told Abhinav to hand over his personal items. Nikki was the happiest person. Rahul and Nikki fought over this. Abhinav was clearly disappointed and Rubina told him what went wrong.

- The episode ended with Aly's and Kavita's argument.