The house of Salman Khan's Bigg Boss is often known for its aesthetics. Just like the show, the house also offers many surprises every year. The house that welcomes its guests annually, is tastefully done keeping themes of the seasons in mind. This year, Bigg Boss 15 is going to take the participants on a wild ride. This year, the house has taken the shape of a beautiful jungle and will pose many 'sankats' for the participants.

Designed by the talented artist and filmmaker Omung Kumar and Vanita Omung Kumar, the Bigg Boss house incorporates nature in the concrete jungle beautifully. The aesthetically done property takes us into a different magical world that will lay obstacles before the contestants. So, before Bigg Boss 15 goes on air, let's take a tour of the jungle a.k.a the house.

The garden area has been transformed into a jungle where lots of drama is bound to happen. Replete with lush green trees, beautiful hangings, grass, a swing hanging from the bark and a khufiya darwaza, the jungle exudes beauty and eeriness at the same time. A pool equivalent to a pond has been adorned gracefully with pink lotuses. Elevating the beauty of the jungle further is the speaking tree of temptation VishwasunTREE that stands right at the heart of the jungle. Rekha is the voice of the magical tree. The wilderness also extends into the part living and part kitchen area wherein the contestants will be seen spending most of their time. Further into the bathroom, one can find creepers, climbers, greens emerging from sides along with bamboo furnishing. 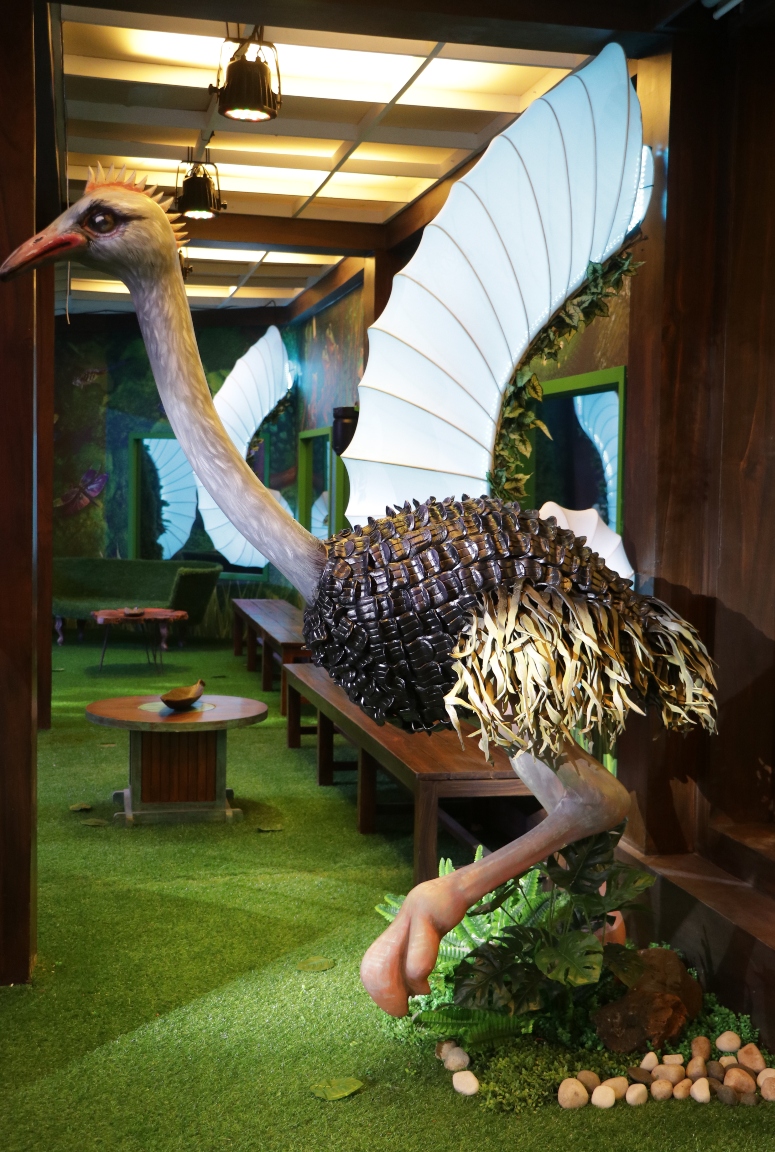 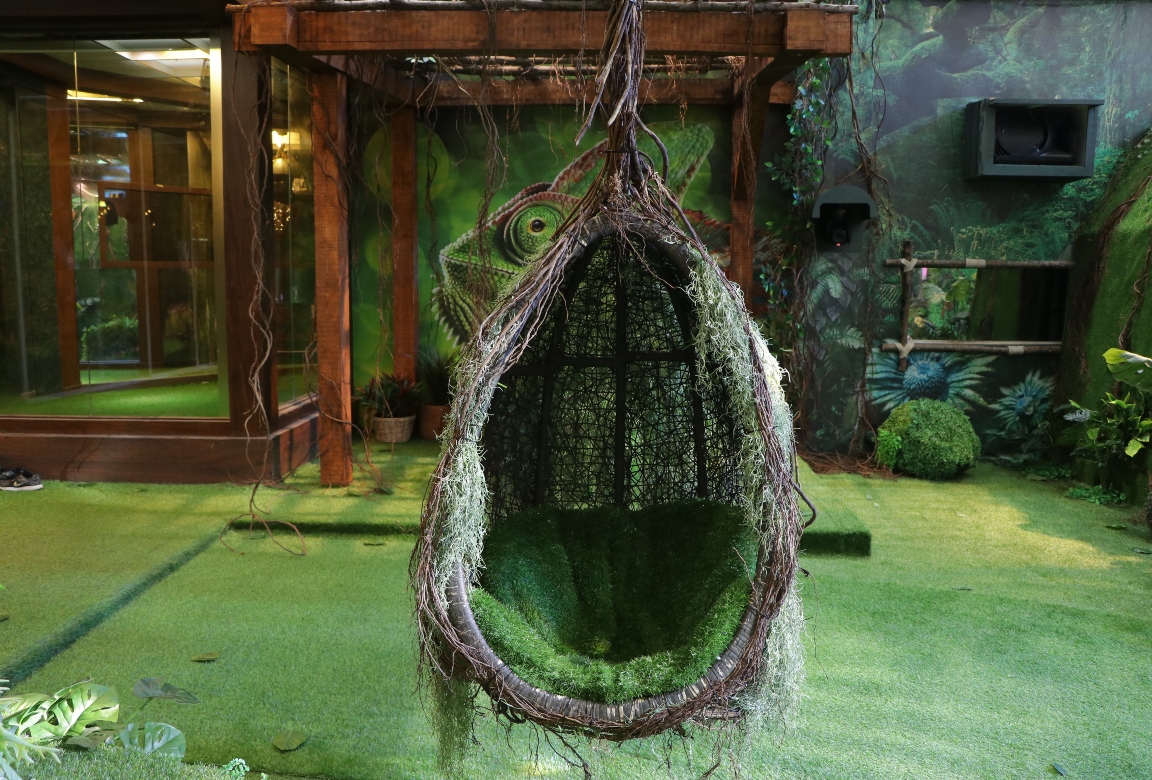 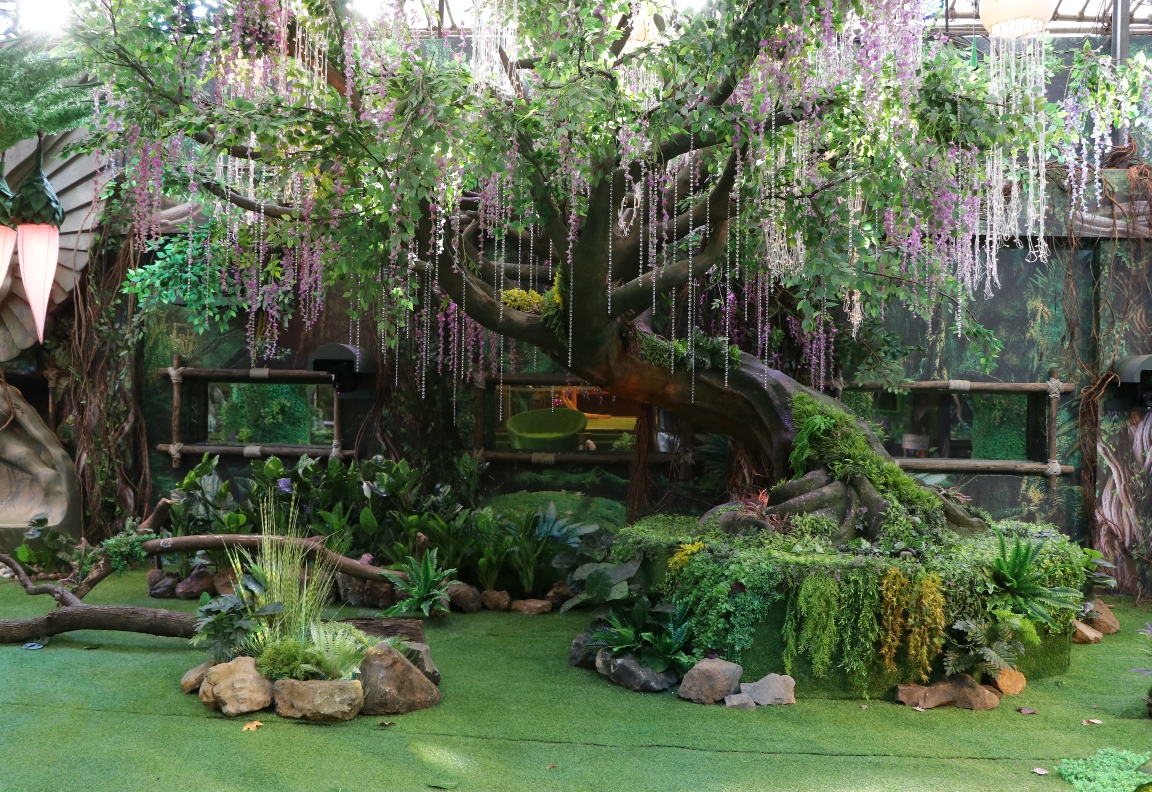 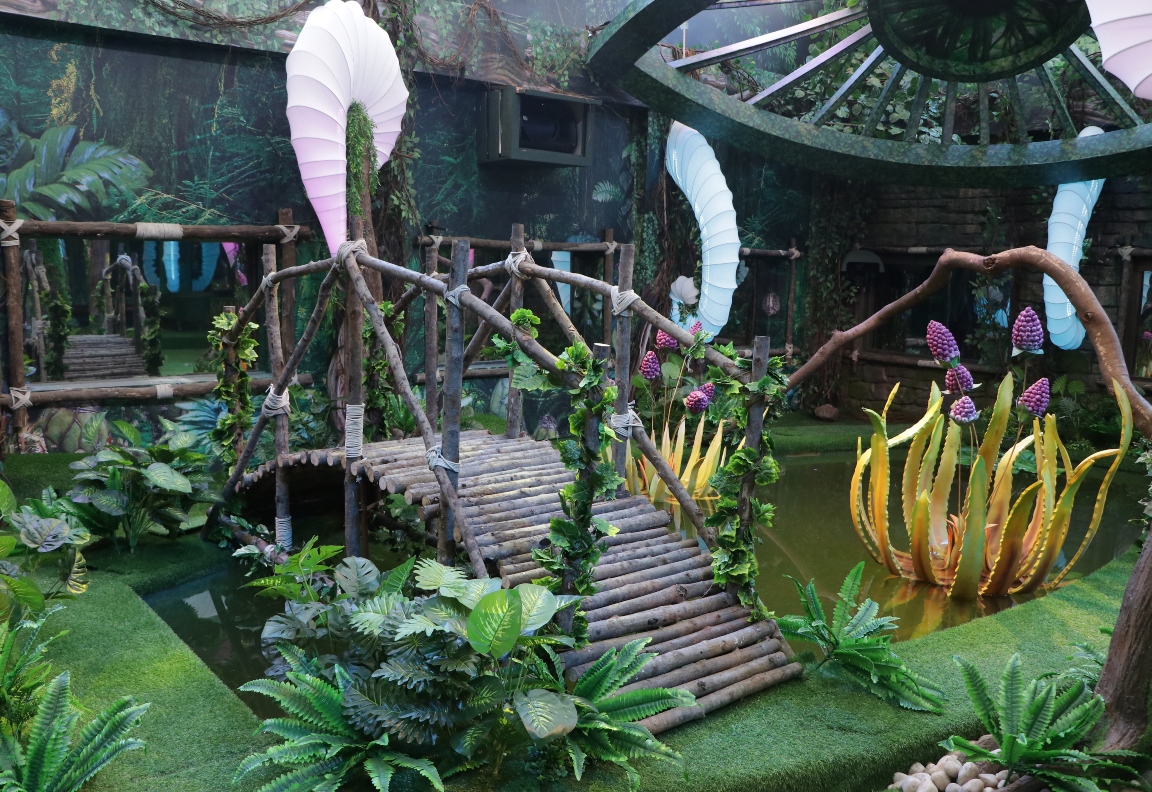 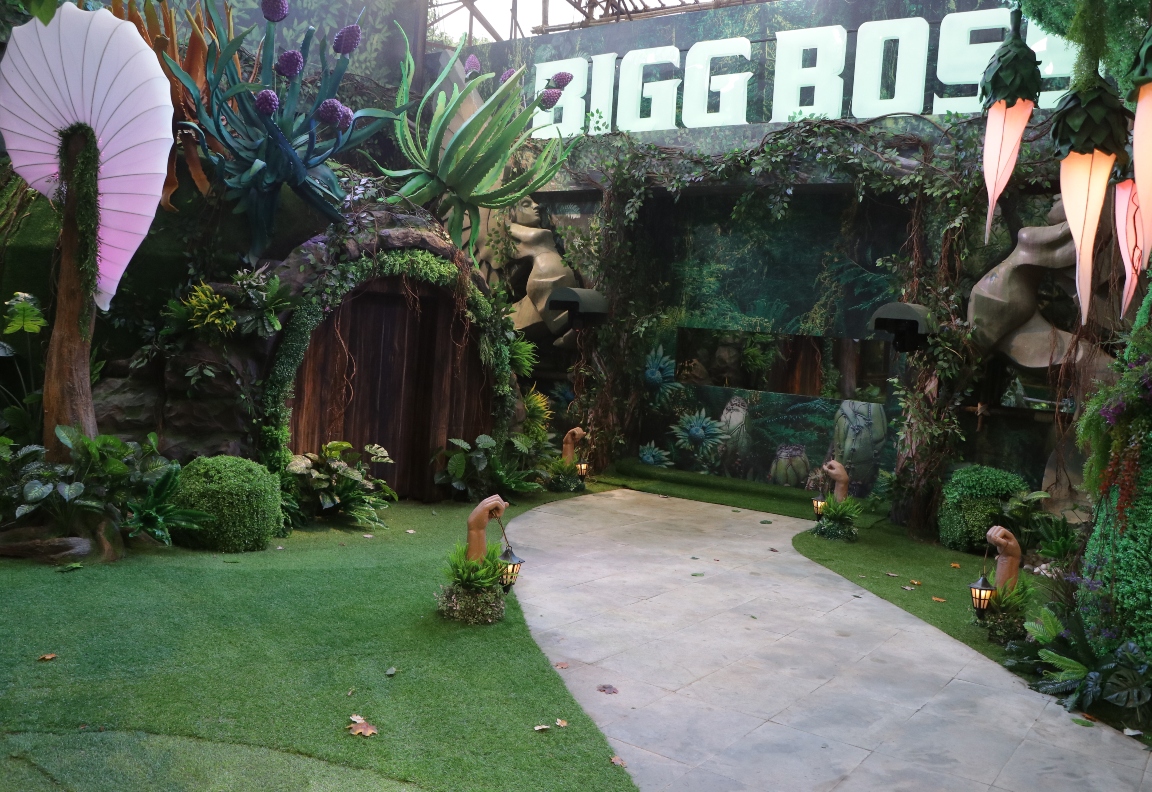 A haven of opulence

After crossing the jungle a.k.a garden area, the contestants will enter the main house that is nothing short of a visual spectacle. Festooned with magnificent animal motifs, prints, paintings and floral wallpapers, the non-jungle part of the house is an epitome of beauty. A giant flamingo structure built in the middle of the living room leaves you bewildered. The other side of the area gets a regal feel with the large crown hanging from the ceiling. The kitchen has an uber-modern look with the versatile Fornasetti’s art prints coupled with crystals and lights. Bigg Boss is known to give flight to people’s dreams and the ‘Come Fly With Me’ typography is a testament to it. Apart from that, the house is awash with ‘Wings’ structures in the living and bedroom giving it a celestial feel. With a golden and yellow theme, the bedroom area gets a mystical and dreamy vibe. 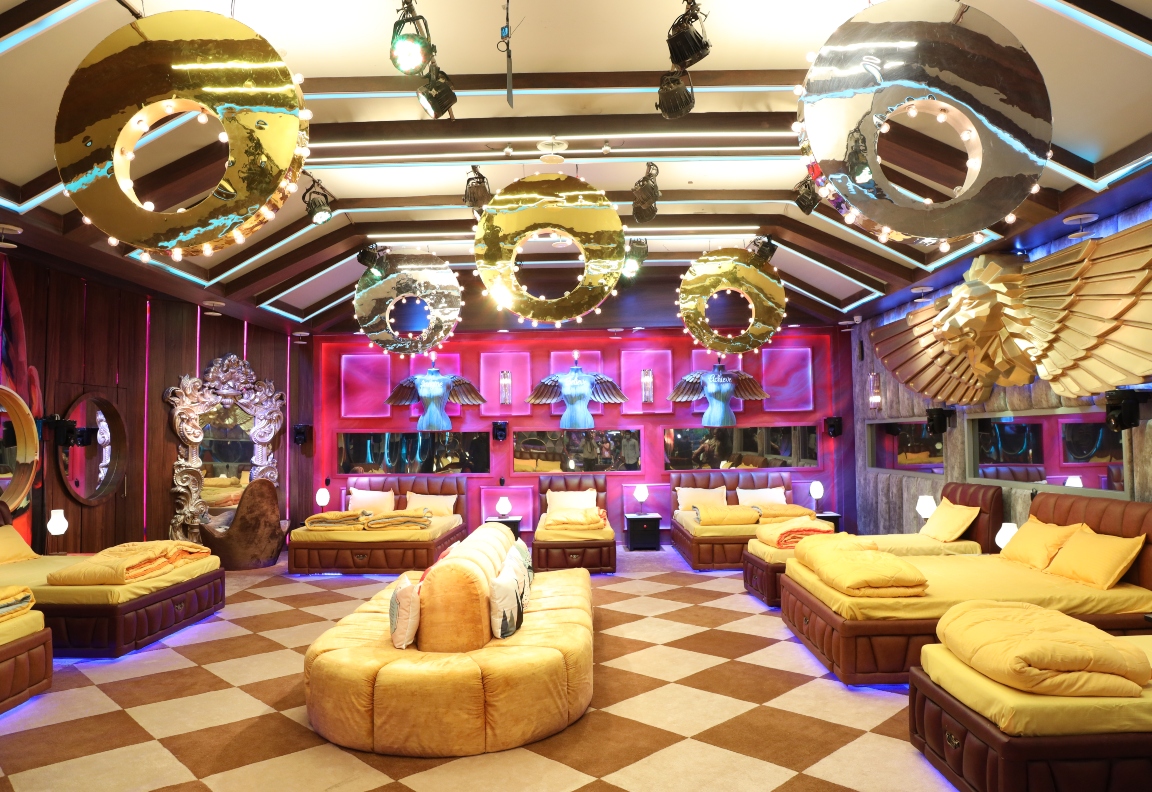 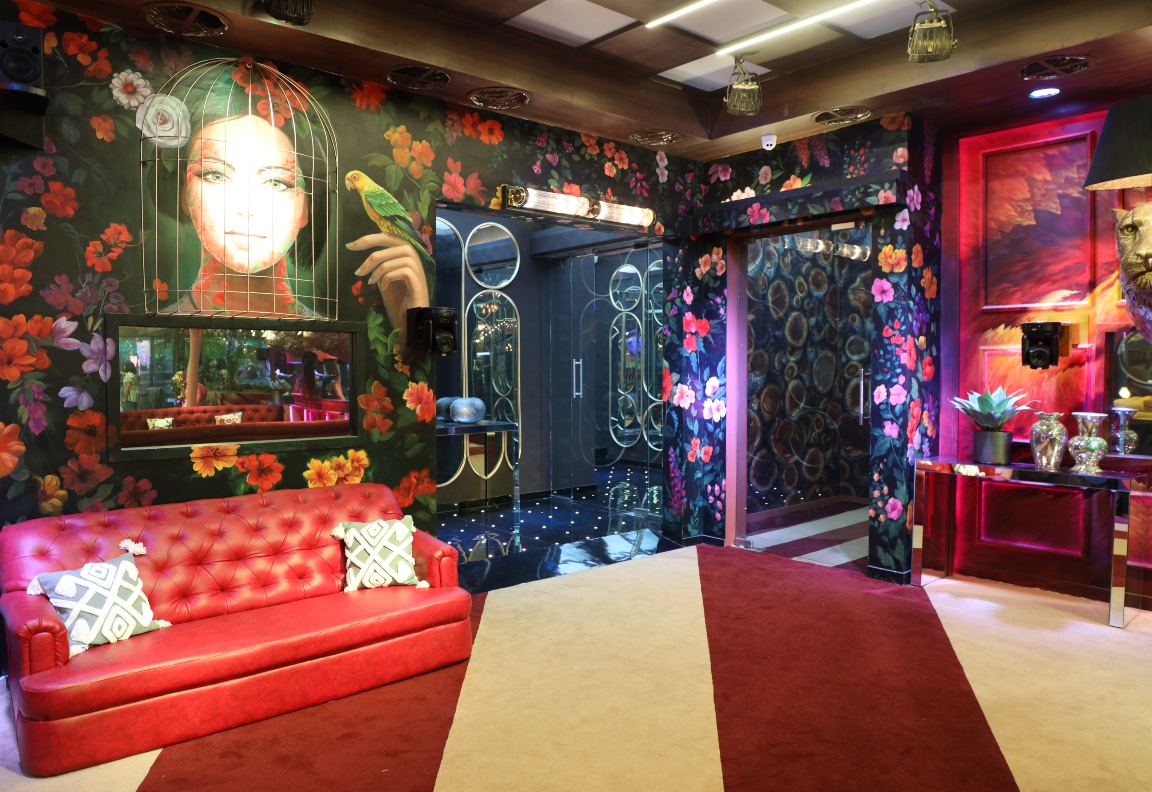 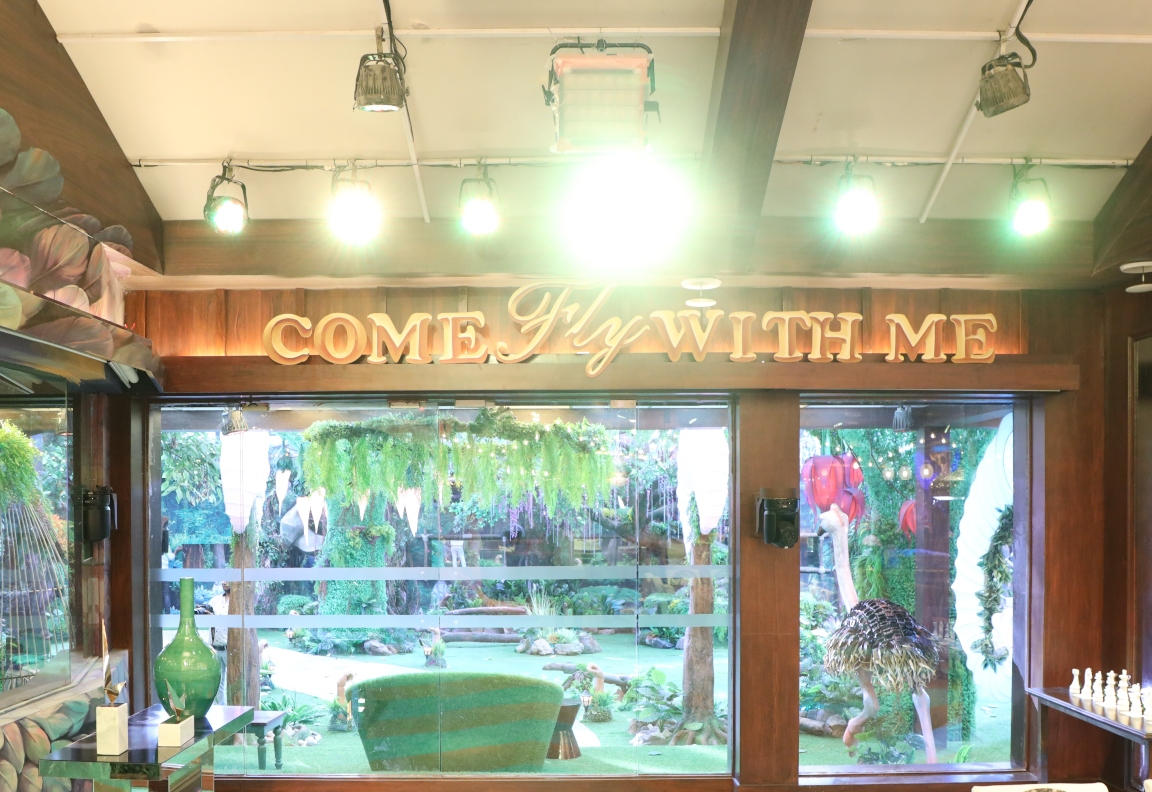 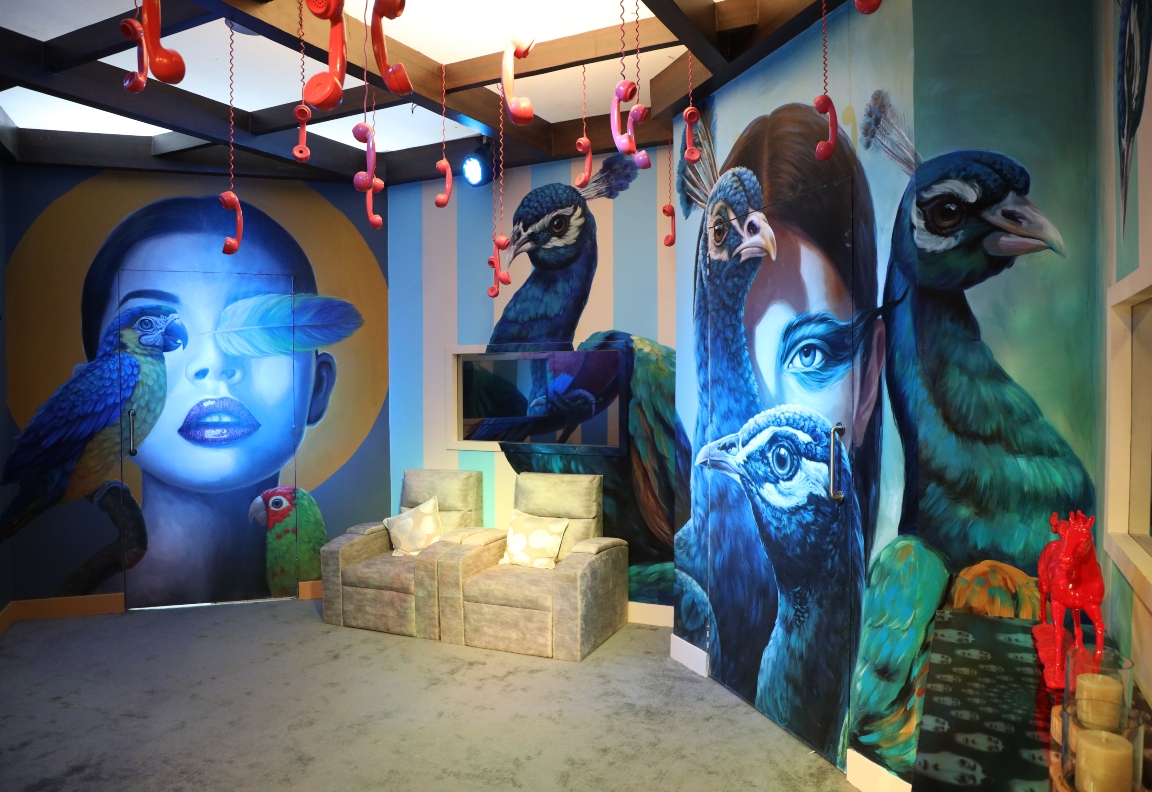 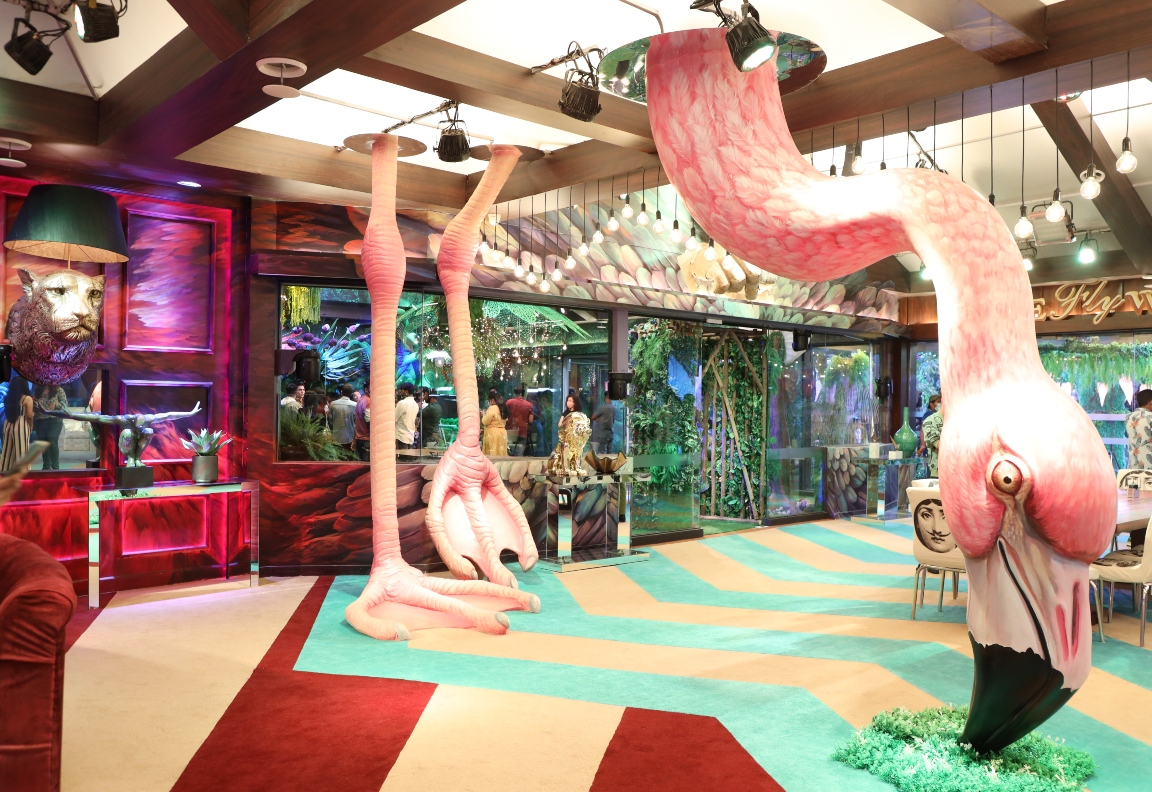 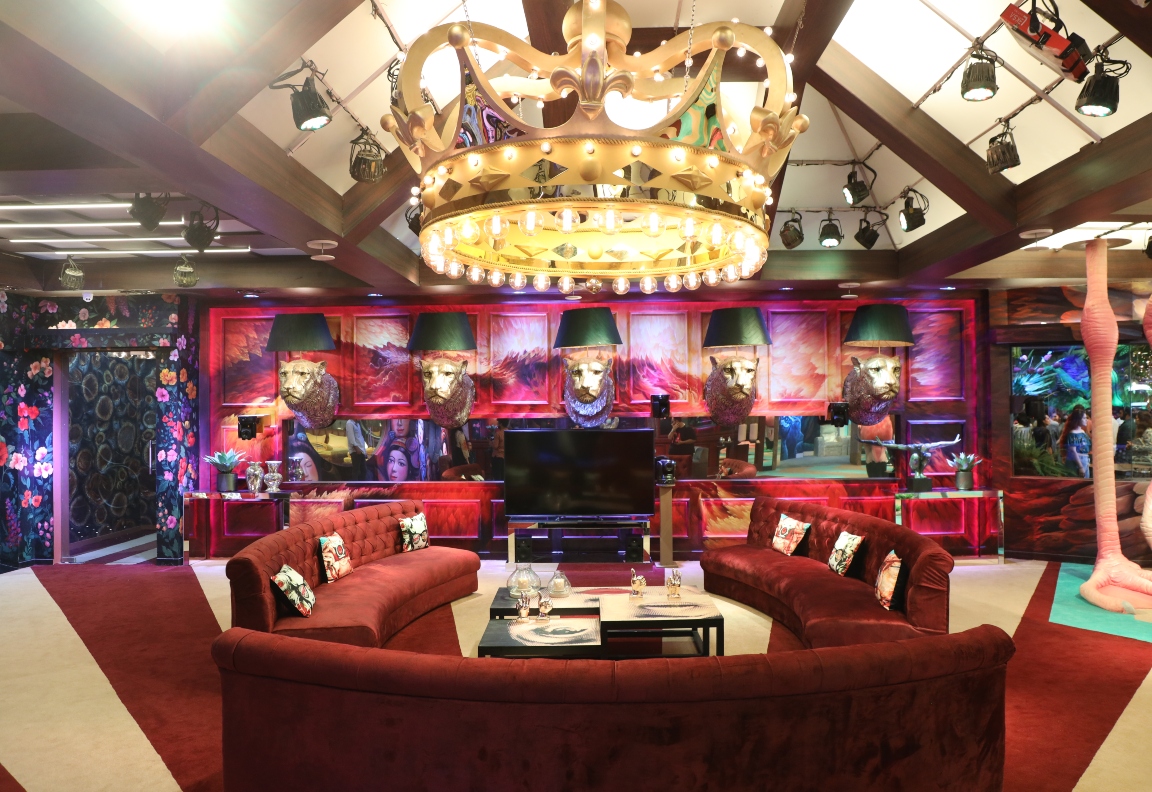 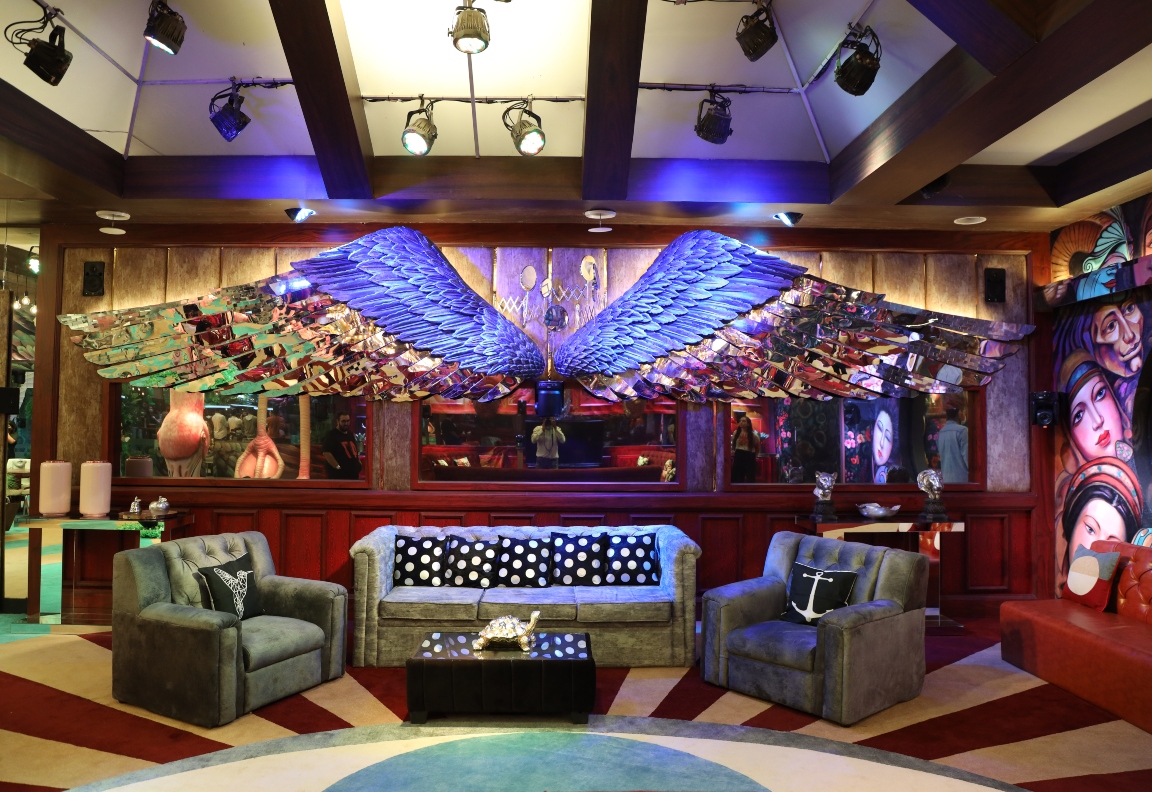 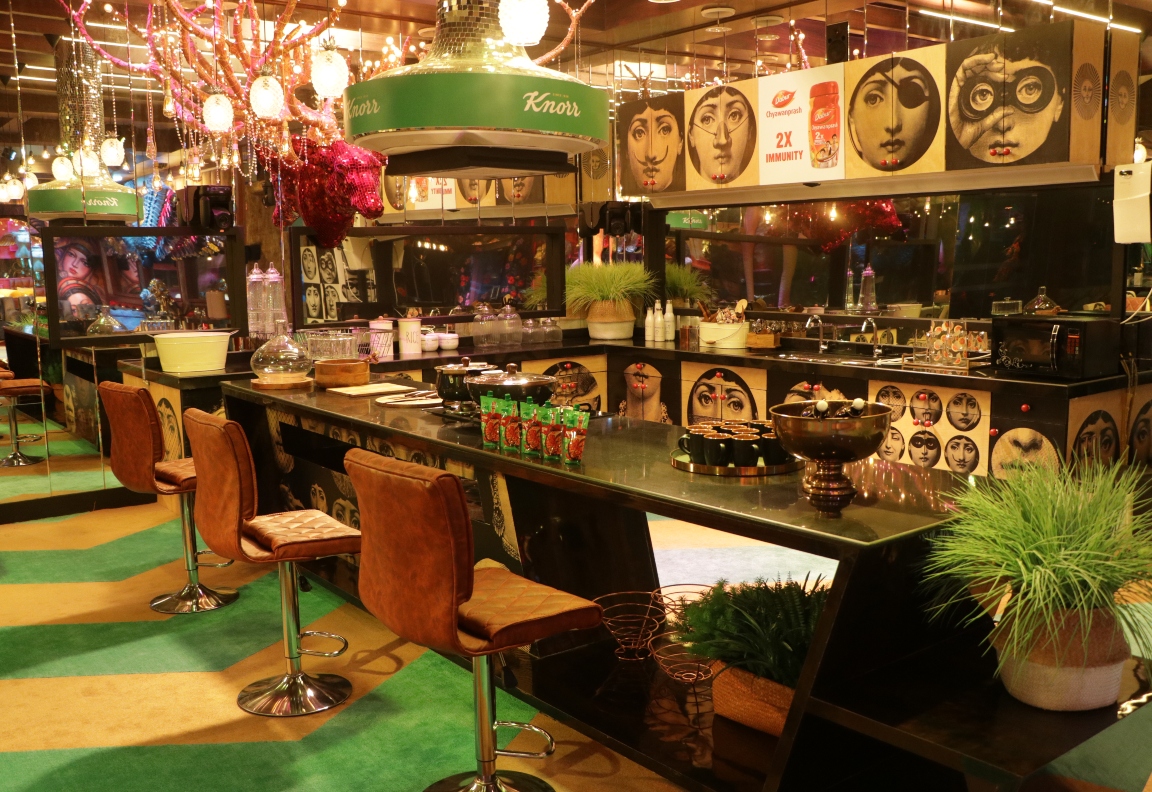 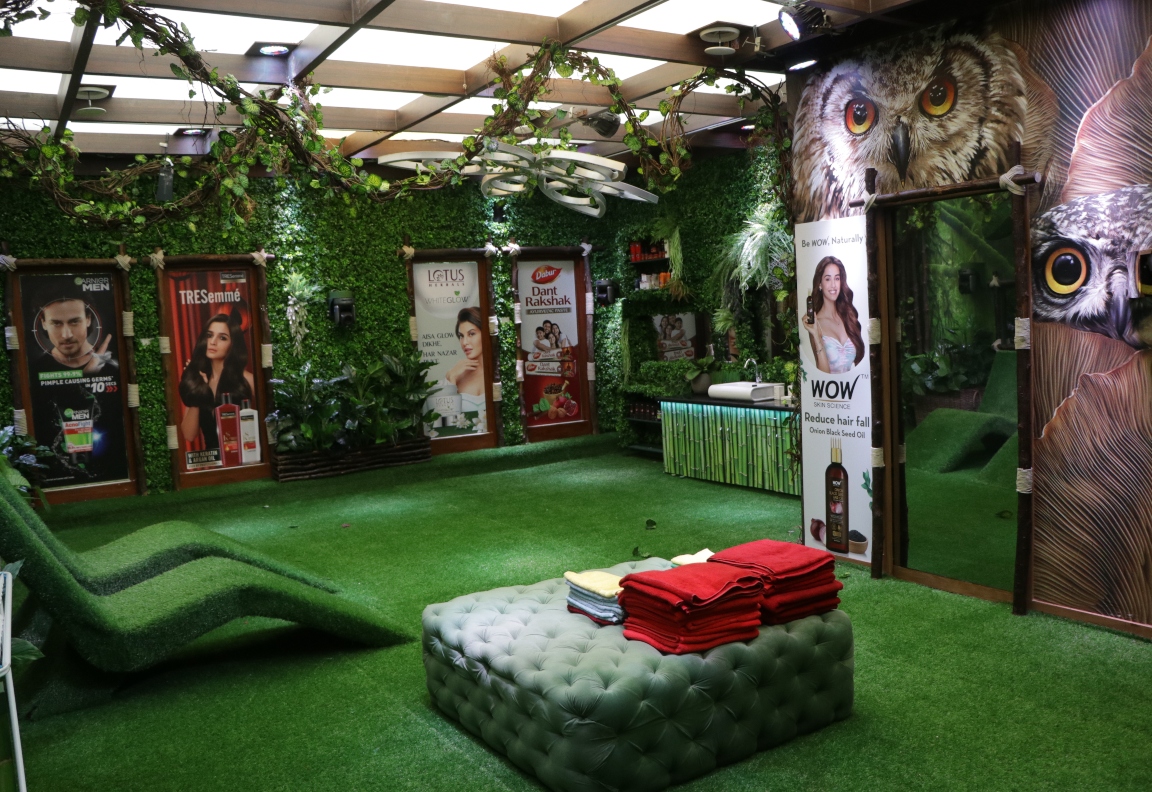 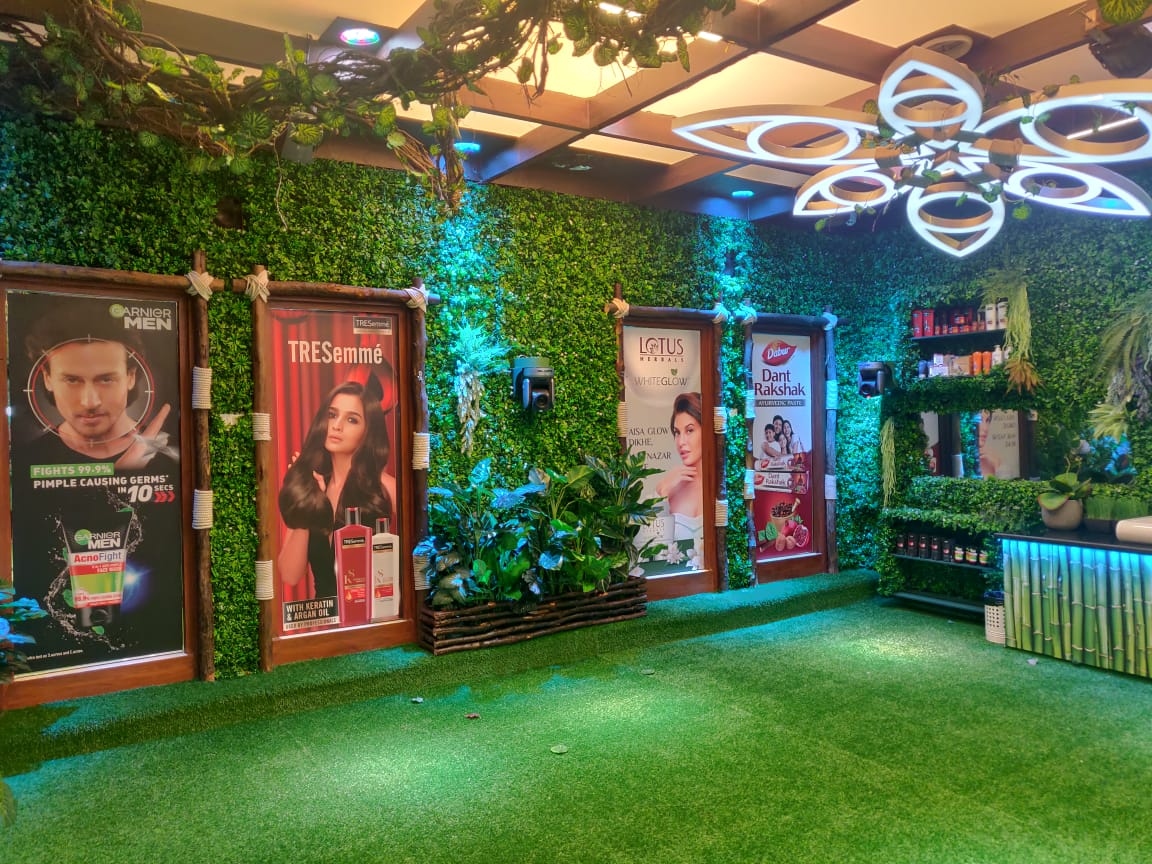 The confession room in the Bigg Boss house is an important area. Every word you say, every statement you make counts when you are in the room of the Boss. Be it nominations, conversations or deepest confessions, this place harbours many secrets. This season, the contestants will be making confessions in a room done with a plush couch and chair, adorned with plenty of cushions in hues of purple and maroon, overshadowed by a lit oversized crown. 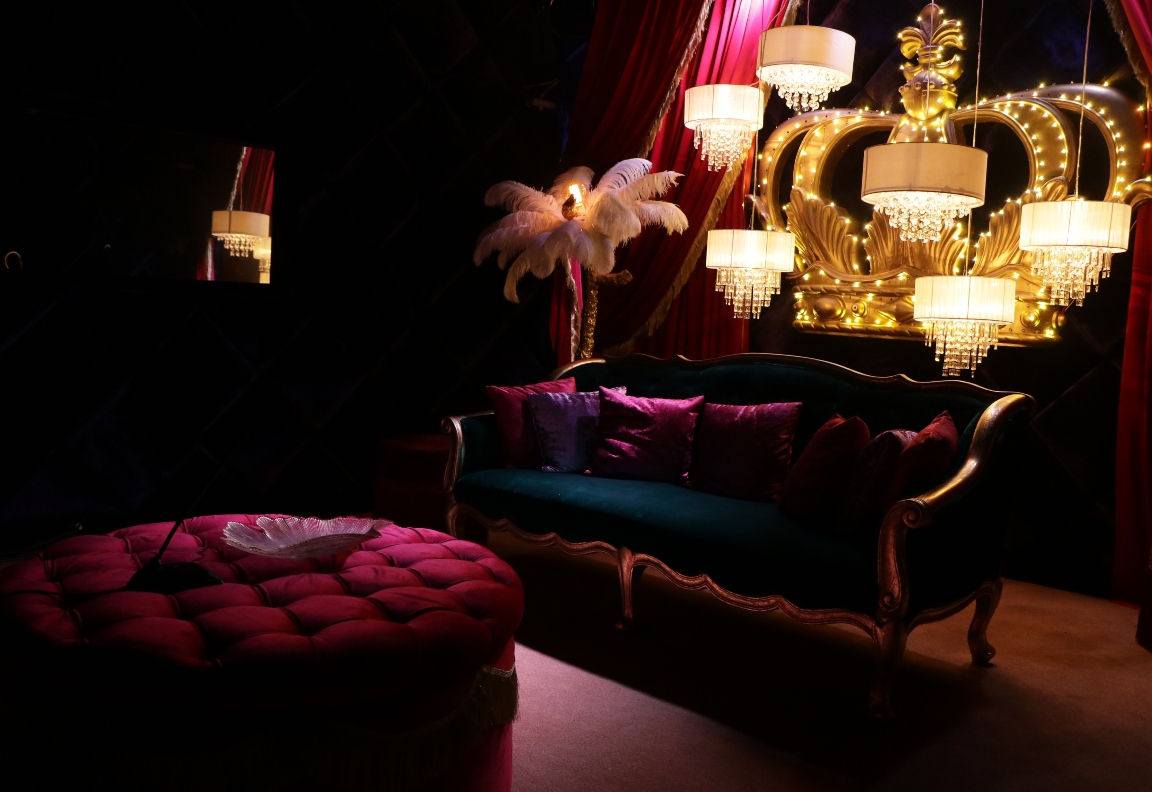 Talking about designing the Bigg Boss 15 house, Omung and Vanita Omung Kumar said, "Designing the Bigg Boss creatively every year comes with its own set of challenges. While it is a place where the contestants stay locked in under strict surveillance for months at a stretch, it needs to have a combination of luxury and hardships. But this season, we have innovated a lot since the house had to be a jungle and we had to bring that alive through every corner of the house. So, while you will find the garden area turned into a jungle with lots of greens, flowers, hangings and barks, you also see a reflection of jungle and animals inside the house as well. Bring floral prints, animal structures, huge wings give the house a surreal vibe that will sometimes comfort the housemates while sometimes play a spoilsport. The house has been very interestingly designed and I hope the contestants and viewers like it."