Karan Kundrra, Tejasswi Prakash, Shamita Shetty, Nishant Bhat, Pratik Sehajpal, Umar Riaz and Rajiv Adatia are marching towards the Bigg Boss 15 trophy and have completed almost 50% of the journey. Like every season, the makers have brought in some wild card contestants. Rakhi Sawant has once again participated in the reality show but this time, her husband Ritesh is with her. This is Rakhi's third stint in Bigg Boss after seasons 1 and 14.

Ever since she entered the house, she has been grabbing eyeballs for the right as well as wrong reasons. In the episode aired on Friday, Rajiv Adatia made tea for her. After taking a sip, she found it to be too sweet for her liking. She commented, “Ye Rajiv khud bhi Meetha hai Aur itni meethi chai banayi hai”. The channel muted the words but Rakhi's gesture indicated it all. Rajiv was disturbed by Rakhi's homophobic comment. 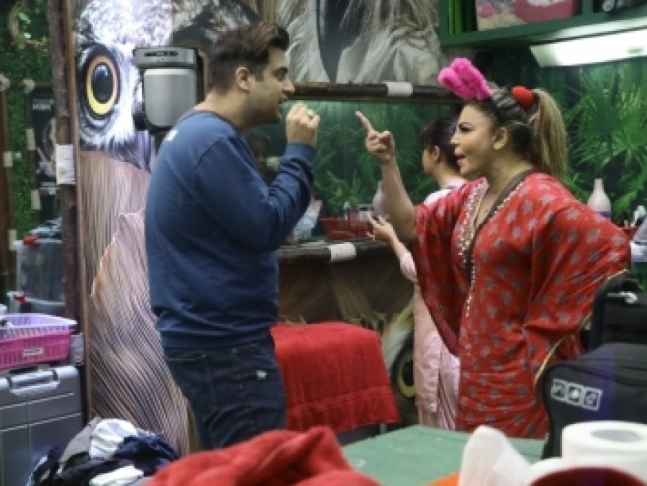 Recommended Read: ‘We were not born into wealth, have struggled, uphold our middle-class values,’ says Shilpa Shetty lending support to sister Shamita inside Bigg Boss 15 house

In the recent episode, Rajiv spoke to Umar Riaz and Rashami Desai about the incident. He said that he didn't react at that time because he was not aware of the meaning of the word. Rajiv added that when he understood the meaning of the term, he felt bad. Umar supported Rajiv whereas Rashami asked him to talk to Rakhi as she has the habit of saying things for the sake of entertainment.

Recently, Rakhi and Rajiv got into a fight over kitchen duties. She accused him of spitting in the food and decided to shift him from the kitchen to bathroom duties. Rajiv was seen talking to Karan Kundrra and Umar about Rakhi and said he has lost all respect for her after the incidents.

Bigg Boss 15: Karan Kundrra's parents give their stamp of approval to his relationship with Tejasswi Prakash, say 'she is in the heart of the family now'

Bigg Boss 15 Promo: Salman Khan slams Tejasswi Prakash for playing the 'sympathy card', asks her to shut up as she defends herself

Bigg Boss 15: Tried to demean just to set a narrative about me- Umar Riaz reacts to Geeta Kapur's comment on his profession