Salman Khan’s controversial reality show Bigg Boss 16 is soon going to hit the TV screens. Since the show is going to kickstart in a week’s time the makers are busy getting the final contracts signed by the participating contestants. Now, the latest names who have been confirmed to be a part of the show are Soundarya Sharma, Gautam Vig and Nimrit Kaur Ahluwalia.

Reportedly, Soundarya, who has featured in the film Ranchi Diaries and in web series Raktanchal has been confirmed as a participant. Gautam who has been a part of serials like Saath Nibhaana Saathiya 2, Naamkarann, Pinjara Khubsurti Ka, Tantra and Ishq Subbhan Allah is also all set to participate. 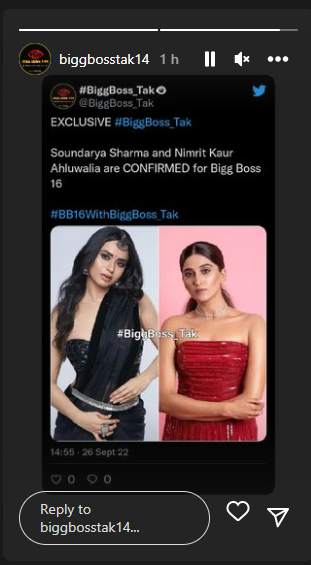 Nimrit has been a former Miss India contestant and performed the lead role in Colors’ Choti Sarrdaarni. Besides these, Tinaa Dutta, Sreejita Dey may also be a part of Bigg Boss 16, alongwith Imlie lead Sumbul Touqueer and Femina Miss India 2020 runner-up, Manya Singh. Director Sajid Khan can also be a part of the show. Surbhi Jyoti, Kanika Mann, Prakruti Mishra, Arjit Taneja and Shalin Bhanot are speculated to join the show as well.

The grand premiere of Bigg Boss 16 will air on October 1 and a couple of the contestants will be introduced and locked inside the house for the coming 105 days. The show will then air Monday-Friday at 10 pm, whereas Salman will grill the housemates on the Weekend Ka Vaar at 9:30 pm on weekends.