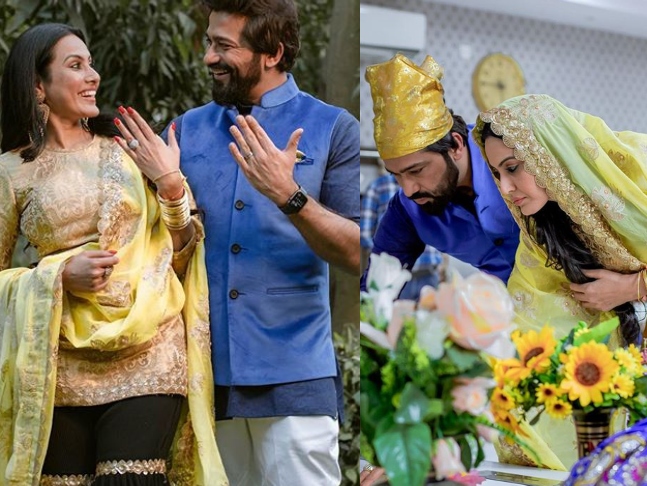 The wedding season in the telly land is back and Kamya Punjabi is all set to tie the nuptial knot once again. The actress, who is currently seen in Shakti — Astitva Ke Ehsaas Ki will be marrying her beau Shalabh Dang in a Gurudwara wedding on Monday. Kamya, just two days prior to her big day, got engaged to Shalabh at a Gurudwara with both the families in attendance. The 40-year-old actress, sharing her happiness with her fans, uploaded pictures and videos from the private engagement ceremony on her Instagram account.

Kamya, on Instagram, shared pictures from the Gurudwara wherein Shalabh and she can't contain their excitement. The actress, for the function, opted for a lovely golden and black sharara. She teamed her outfit with statement earrings and went for subtle, fresh makeup. Shalabh complemented her well in blue kurta-jacket and white pyjama. Kamya's 9-year-old daughter Aara was also a part of the ceremony.

Kamya was formerly married to Bunty Negi and Aara is her daughter from her first wedding. Shalabh is also a parent to a 10-year-old Ishan. The actress, who is best remembered for her role as Sindoora in Banoo Main Teri Dulhann, came out in the open about her relationship with Shalabh in September last year. Since then, the couple has been setting major goals through mushy social media posts.