Another legend leaves us: Ali Asgar, Karan Tacker and Karanvir Bohra pay their last respect to Jagdeep after his demise

Veteran actor-comedian Jagdeep, best known for his role as Soorma Bhopali in Sholay, passed away on Wednesday at his residence. He was 81. The actor was not keeping well. "He passed away at 8.30 pm at his residence in Bandra. He was not keeping well due to age related issues," producer Mehmood Ali, a close family friend, told a news agency. Jagdeep appeared in around 400 films but it is his role as Soorma Bhopali in 1975 film Sholay that is etched in audiences' minds even today. He also played memorable roles in Purana Mandir and in Andaz Apna Apna as Salman Khan's father.

Rest in Peace Jagdeep sir. I have performed/enacted so many of your film scenes on the stage of school functions. You will be missed. My condolences to @NavedJafri_BOO @jaavedjaaferi and the entire family

Loved watching Jagdeep sahab while growing up.. will always remember him in fond memories , thank you for all the entertainment sir..
My deep condolences to the family #Jagdeep 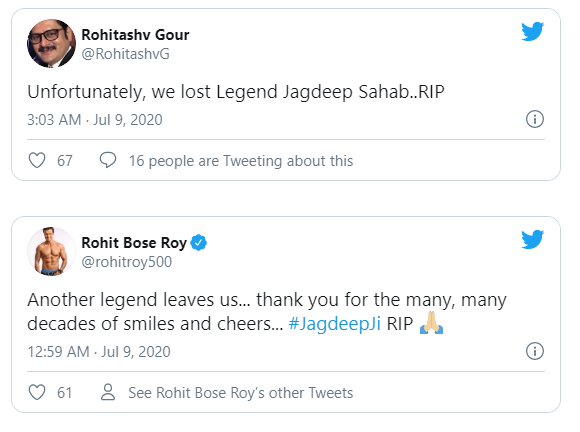 Jagdeep is survived by two sons - Javed and Naved.

Gauahar Khan shares unseen pictures with Zaid Darbar on their 1 month wedding anniversary, calls it a 'celebration of finding my true love'

Makers to pull the plug on The Kapil Sharma Show, to return with a new season soon?