With the rise in cases of depression, anxiety, suicides and more specially amongst the youth of today, the mental health stigma has finally been broken and is now being given a lot of importance. Amongst all the people who are now openly speaking about their experiences and trying to help out others going through similar issues to help them cope better, actor Karanvir Bohra has also come forward to address the mental health scenario we are facing right now, and is actively trying to build more awareness and help those in need in the process.

Karanvir has recently taken to his social media to start a series called 'Kushal Mangal' after the passing away of his good friend Kushal Punjabi due to suicide, and is through the initiative speaking about how mental health issues can be tackled and taken care of. 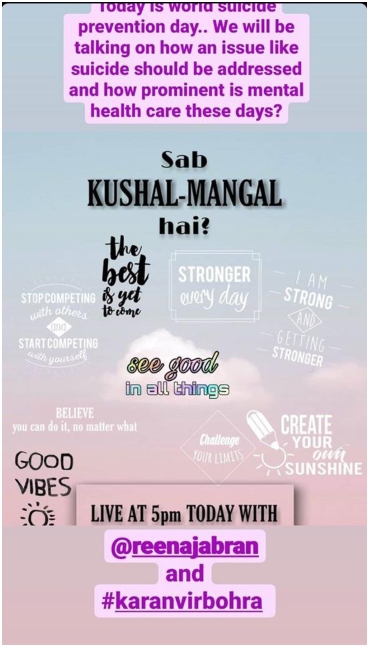 Speaking about 'Kushal Mangal' and his views on the mental health stigma, Karanvir shared, "Somehow mental health has always taken a backseat in our country, but over the years with the rising number of cases leading to depression, suicide, anxiety and more has finally brought it to the forefront and given it its much due importance. While we always prioritized physical health, mental has never been given priority, and I truly feel that now is the time it should be! Times are changing and people are sadly taking the unfortunate route of suicide to end their problems, when ideally fighting them and getting through them in a brave manner is what they should be doing. After having experienced the loss of my good friend Kushal Punjabi due to him committing suicide, I realized that such issues of the mind like depression & anxiety due to which such drastic steps like suicide are taken, need to be openly addressed, accepted and worked on."

"The lockdown has also seen some unfortunate suicide incidents which have definitely left us all shocked! So that's when I began working on my 'Kushal Mangal series, which is an initiative to spread awareness about mental health issues and how people can tackle them and help themselves to deal with them in a better manner and importantly understand how and why they occur, through my social media platforms. I have been doing these live series with Reena Jabran, a neurolinguist, who has been sharing her deep insights and views on the topic as well, and together we have been aiming at doing the best we can to make people aware of mental health issues." he concluded.