TV actor Aniruddh Dave had tested positive for Covid-19 last week. However, his condition has deteriorated and he is in the ICU (Intensive Care Unit) of a hospital in Mumbai now. The news was shared by actress Aastha Chaudhary on Instagram. Aniruddh is known for shows such as Patiala Babes and Lockdown Ki Love Story.

“Need prayers for our friend @aniruddh_dave. He is in icu. Plz spare a min and do pray for him,” she wrote. Reportedly, his oxygen level has fluctuated due to which he was put in the ICU. 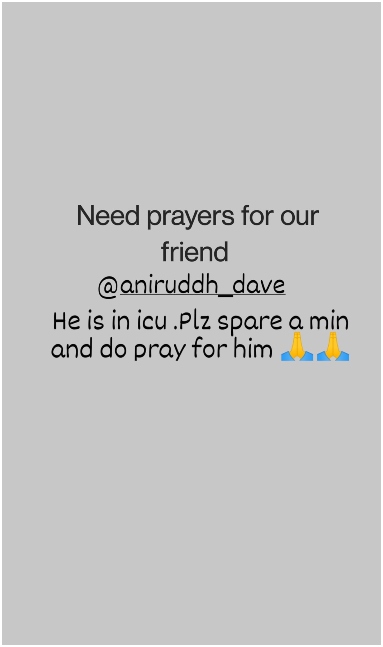 Aniruddh was diagnosed with COVID-19 when he was in Bhopal, shooting for a web series. His friend, Ajay Singh Chaudhary, told a leading daily, “He was being treated in Bhopal, but his recent reports suggest that his infection is more than normal and thus, has been shifted to the ICU. He had to be shifted to the intensive care unit, because his oxygen levels could have fluctuated owing to the infection.”

Aniruddh rose to fame as Inspector Hanuman Singh on Patiala Babes. Currently, he is seen playing the role of an eunuch in Shakti - Astitva Ke Ehsaas Ki.