Popular television actor Pearl V Puri is in judicial custody for allegedly raping a minor girl in 2019. Arrested under the POSCO Act, the Naagin 3 actor will be in jail till June 12 as per the Vasai court's order. On Monday, Pearl's Teri Aankhon Mein music video’s co-star/ producer, Divya Khosla Kumar revealed the name of the alleged victim's mother on social media and called all allegations against the actor false. Divya further lashed out at the minor's mother for not revealing the truth.

Soon after Divya's post went viral, the alleged victim's mother issued a statement on her Instagram. "A lot of people are calling and asking me to come to the media and speak. My silence should not be construed as my weakness. My respect and faith in the judiciary has made me take this step. Many people have choose to ridicule me and my daughter in public which is not permissible by law. Publicising a victims name in public is a offence. I choose to remain silent as I am not the complainant in the case. Whatever is true shall come out. The matter is subjudiced and hence I am not speaking to anyone as the custody case is pending in the Highcourt and it’s my earnest request to all that please don’t make a mockery of the legal system as I have given my statement to the concern authorities. Let the truth prevail," she wrote. 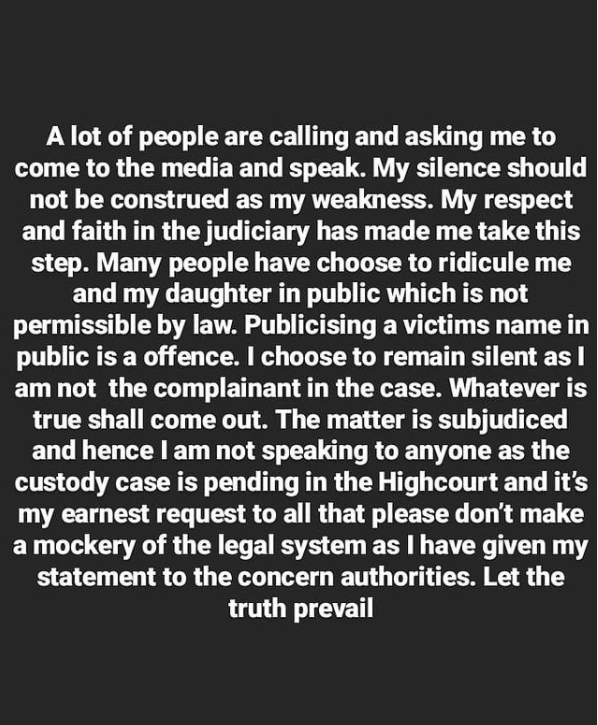 Recommended Read: Divya Khosla Kumar claims Pearl V Puri is falsely accused of rape because of a marital conflict, says 'disturbing that a poor child is being mentally played with'

Reacting to this, Divya commented, "Pearl lost his father recently, his mother is a cancer patient... she has no one to help her .. she has been calling me repeatedly crying .... He has been put behind bars in a rape case under such strong sections that their is no bail ... High court is closed due to Covid & holidays .... in the meantime if something happens to Pearl's mother who should we hold responsible ???? Coz the law will take its own time .... U have enough time on hand but a senior citizen suffering from cancer .... Do you realise the sensitivity of the whole case?" 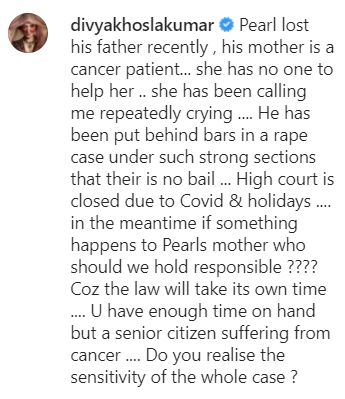 A few days ago, producer Ekta Kapoor's conversation with the alleged victim's mother allegedly went viral. During the call, the minor's mother confessed that Pearl has been falsely framed by her husband. She can be heard saying that the incident never happened and she stands with Pearl. In the audio clip, the actress called her husband abusive and claimed that he must have tutored their daughter. The parents of the alleged victim have separated.

Ravi Dubey recalls getting suicidal thoughts, says one can 'surmount the biggest of obstacles' with positive outlook and hope

PeepingMoon Exclusive: Did you know Mrunal Thakur had to turn down Satyamev Jayate for Super 30? The actress reveals!