Advertisement
HomeTELEVISION NEWSTELLY BUZZRekha shoots for Dance Deewane 3 episode with Madhuri Dixit, all we can say is 'haye maar daala'!

Rekha shoots for Dance Deewane 3 episode with Madhuri Dixit, all we can say is 'haye maar daala'! 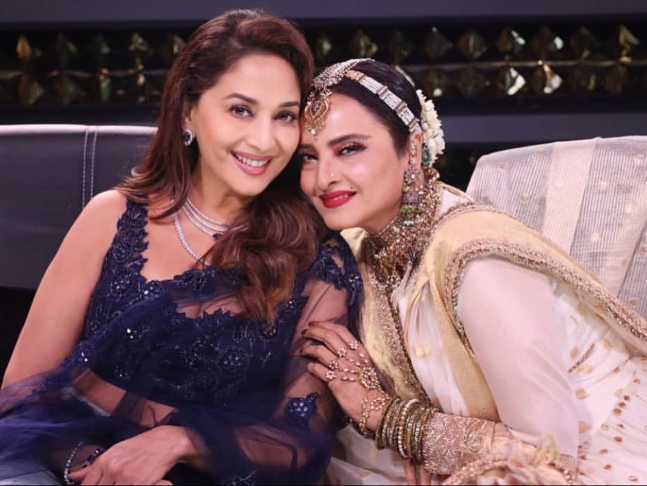 If Rekha had a synonym, it would be grace and beauty. The multilingual actress who has acted in over 180 films, only in Hindi, is regarded as one of the most graceful and effortless dancers of Bollywood. Be it In Aankhon Ki Masti and Dil Cheez Kya from Umrao Jaan or Piya Bawri from Khubsoorat, she has mesmerised the audience and captivated them with her beauty. Rekha, who hasn't aged a bit, will be spreading her magic on Dance Deewane 3.

Dance Deewane 3 is judged by Madhuri Dixit, Dharmesh Yelande and Tushar Kalia. Well, with Bollywood's dancing queens Rekha and Madhuri under one roof, we can expect the episode to be simply magical. Pictures of the actresses posing together went viral and we can't keep calm.

For the episode, Madhuri wore a midnight blue lace blouse with a skirt in an eye-catching gradient of powder blue and midnight blue. She opted for a delicate necklace and a matching pair of earrings.

On the other hand, Rekha wore an off-white and golden anarkali. She teamed it up with heavy jewellery and a matha patti.

All we can say is... haye maar daala!