Ranveer Singh’s bold nude photo shoot has broken the internet with some lauding the actor for his guts while others are trolling him. Now, it has landed him in legal trouble as well. An FIR was lodged today at Chembur Police Station against Ranveer for allegedly ‘hurting women sentiments and their modesty’. However, that has not deterred from people talking about it. Now, in a hilarious post Nakuul Mehta recreated the shoot with a morphed image and the result is hilarious. The post became epic when his wife Jankee Parekh rebuked him in the comments section.

While Ranveer posed in the buff for the Paper magazine, Nakuul morphed the same image with his face on it and wrote ‘Stone’ alluding to the ‘Rock, paper, scissors’ game. He captioned it as, “Haters will say i borrowed @ranveersingh ‘s STONE Editor in chief: @crayartistetmet.” 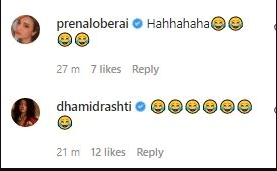 Ranveer stripped down to nothing as he posed on a Turkish rug in a bold photo shoot inspired by Burt Reynolds, who had done a similar nude shoot for Cosmopolitan magazine. However, now the actor is in legal trouble as an FIR has been lodged against him for his photo shoot.