Remembering Krishna Raj Kapoor: Ranbir Kapoor gets candid about Sunday lunches at her grandmom's place in this 2013 BTS video 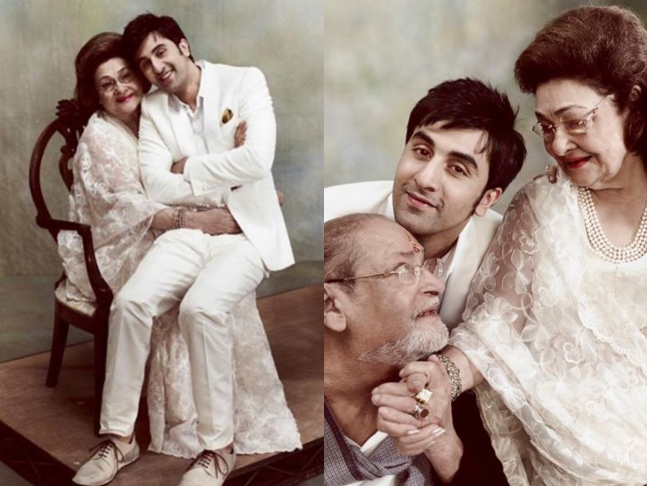 Krishna Raj Kapoor, wife of late legendary filmmaker Raj Kapoor, passed away on Monday (October 1) morning at the age of 87 following a cardiac arrest. She used to live in the ancestral Kapoor home in Chembur area of Mumbai and is survived by her five children - Randhir Kapoor, Ritu Kapoor Nanda, Rishi Kapoor, Rima Kapoor Jain and Rajiv Kapoor.

Now as the entire nation mourns her death which has left an irrevocable void in the Bollywood fraternity, we came across a throwback video from 2013, when the entire Kapoor khandaan got together for a leading magazine's photo shoot. The BTS video will certainly leave you teary-eyes as it was probably the last time that the Kapoor matriarch was clicked with all her children and grandchildren.

The video features Ranbir Kapoor, who was extremely close to her grandmom, getting candid about her lavish Sunday lunches at her home. He said, "We meet every Sunday at our grandmother's place where she has this amazing spread of food, several Peshawari dishes. The entire family comes and we spend the entire day there chatting, speaking about each other's work and experience." He further talked about how it was amazing to hear stories narrated by her grandmother during the family gathering.

In the video, Rishi Kapoor, Neetu Kapoor and Aditya Raj Kapoor can also be seen as they share how it was "historical" that the entire family was getting clicked together after a very long time.

Born in December 1930, Krishna Raj Kapoor married Raj Kapoor in 1946. Her last rites will be performed at Chembur crematorium today. May her soul rest in peace!