Advertisement
HomeBOLLYWOODENTERTAINMENT NEWSThrowback Video: Ranbir Kapoor reveals how ‘incredible and enriching’ it was to live with his grandmom Krishna Raj Kapoor

Throwback Video: Ranbir Kapoor reveals how ‘incredible and enriching’ it was to live with his grandmom Krishna Raj Kapoor 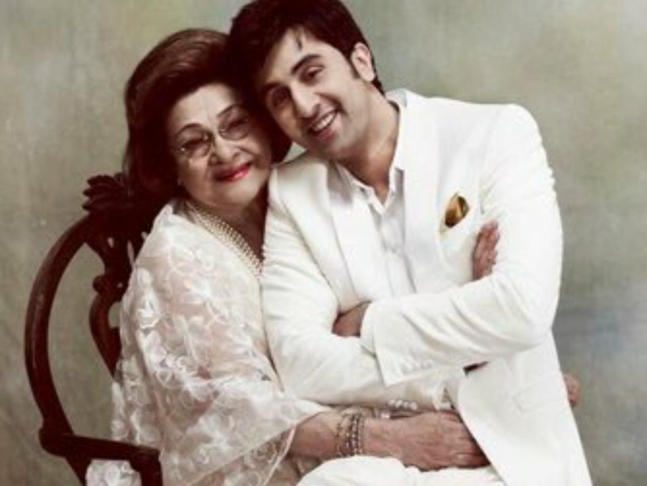 Krishna Raj Kapoor, the wife of legendary filmmaker Raj Kapoor, passed away today on October 1 at the age of 87 following a cardiac arrest. She used to reside in the Kapoor ancestral house in Chembur area of Mumbai and out of all her grandchildren, she was said to be closest to her first grandson, Ranbir Kapoor. The actor, as well, was extremely fond of her grandmother, so much so that when his house was being renovated in 2016, Ranbir chose to move in with his grandmother rather than his parents, Rishi Kapoor and Neetu Kapoor.

Now as the entire nation mourns her death, we came across a throwback video from 2016 (Journalist Rajeev Masand's Archives), where Ranbir revealed how 'enriching' it was to live with his grandmom Krishna Raj Kapoor. During an interview with Rajeev Masand shot at his grandmother's Chembur bungalow, Ranbir said, "My grandmother, by far, is the most like-minded person I've ever met. It is amazing to just spend time with her, talking about our lives apart from sharing our experiences of movies and food."

"I have spent some incredible couple of months here. Although I've always been close to her while growing up but now living with her all over again and hanging out with her, it's an enriching time for me," he added. When Ranbir was prodded if there's some energy that he feels when he visits the house because of his grandparents, he had said, "This place has a magical and isolated vibe. You seem to be cut off from the hustle and bustle of the Mumbai city."