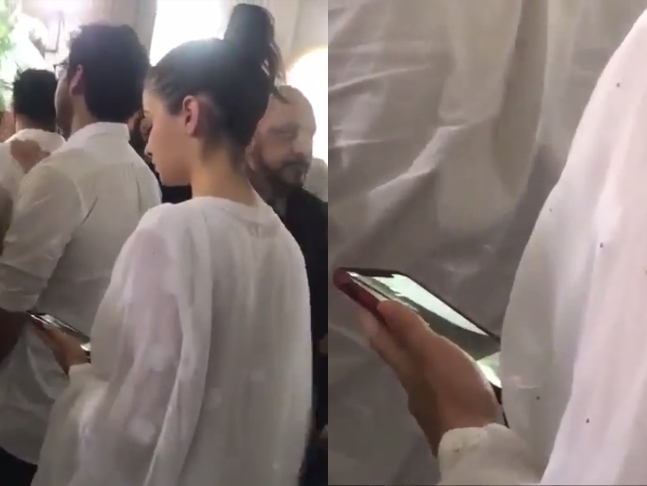 Late filmmaker, film industry's showman, Raj Kapoor's wife Krishna Raj Kapoor passed away on October 1 at the age of 87 due to cardiac arrest. The last rites of the first lady of cinema was attended by the whos who of Bollywood, however, it was her grandson Ranbir Kapoor who could not be a part of the same as he was not in the country. Not just Rishi Kapoor, but also wife Neetu and son Ranbir missed the cremation of Kapoor Khandaan matriarch Krishna Raj Kapoor as Rishi had to leave for the US to get a worrisome health issue of his own attended. Neetu and Ranbir both accompanied him.

But Ranbir's alleged girlfriend Alia Bhatt was present at the ceremony and made sure she made RK a part of his beloved dadi's ceremony.

In a video that surfaced recently, Alia can be seen facetiming Ranbir whose name she saved as 'RK' on her phone but due to internet issues and connection loss, unfortunately, Alia was not able to reach Ranbir. Even though the actress was not able to help Ranbir watch the cremation ceremony of his beloved grandmother, she was present by the side of the Kapoor clan from start to end, like a pillar of strength, just like Ranbir would have, if he was in India.

Alia even comforted RK's elder sister Riddhima Kapoor Sahni when she broke down after the last rites of her grandmother.

Alia's and Ranbir’s relationship has been the talk of the town for the longest time. But in the tough times as these, actions speak louder than words!