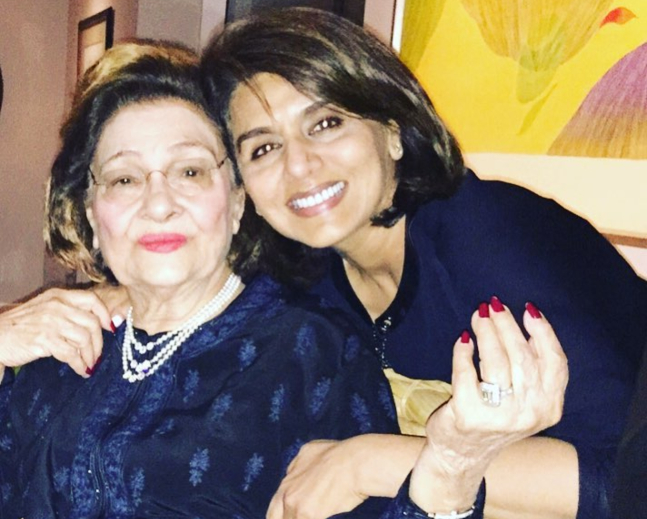 Krishna Raj Kapoor, the widow of the legendary actor-filmmaker Raj Kapoor, passed away on Monday at the age of 87. She breathed her last following a cardiac arrest, as confirmed by her eldest son Randhir Kapoor. Although the entire Kapoor clan was present at the cremation of their matriarch, her son Rishi Kapoor, his wife Neetu Kapoor and son Ranbir Kapoor couldn't attend it.

Neetu, who is in the US where her husband Rishi Kapoor is undergoing treatment, shared a heartfelt post for her mother-in-law after she was unable to attend her funeral. Admiring Krishna Raj Kapoor for her "elegance, wit, generosity and warmth", Neetu termed her as a 'best-friend' who will always hold a special place in her heart. She also shared a picture of herself with the first lady of Bollywood.

RECOMMENDED READ: Alia facetimes Ranbir to help him be a part of his beloved dadi Krishna Raj Kapoor’s cremation

It is not unknown that just like his son Ranbir, Neetu seemed to have had a great bond with Krishna Raj as well. In fact, she was present at Neetu's last birthday celebrations in Paris.

Meanwhile, from Amitabh Bachchan, Abhishek Bachchan, Anil Kapoor, Arjun Kapoor and Alia Bhatt to Aamir Khan, Karan Johar, and Ayan Mukerji, the who's who of film industry were present at Krishna Raj Kapoor's funeral. She is survived by her sons Randhir, Rishi, Rajiv Kapoor, and daughters Ritu Nanda and Rima Jain.