Advertisement
HomeBOLLYWOODENTERTAINMENT NEWSBrahmastra: This is the scene where Alia injured herself while filming with Ranbir in Mumbai; watch video

Brahmastra: This is the scene where Alia injured herself while filming with Ranbir in Mumbai; watch video 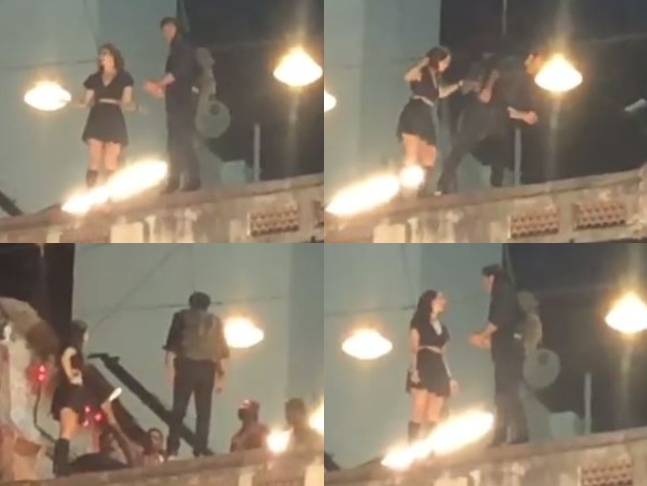 Alia Bhatt injured herself while filming a particular sequence of her upcoming film Brahmastra and we’ve found a video of that scene in question during the shoot of which, the actress ended up with a bruise.  In the short clip, Alia along with co-star Ranbir Kapoor was seen shooting on the terrace of Mandvi Post Office at Bhendi Bazaar in Mumbai.

Alia was pretty in a black crop top and skirt while Ranbir was casually dressed in a tee and pants. It appears that Ranbir and Alia were performing an aerial stunt as we could see the rope attached to their outfit – the ending of which was attached above for the antic.

Alia, in fact, was spotted at a clinic in Juhu on Monday as doctors attended to her injury. She was accompanied by Ranbir – in case you aren’t aware of this, Ranbir and Alia are dating. Both were dressed in casuals as cameras photographed them while they exited the clinic.

Alia and Ranbir photographed outside a clinic in Mumbai.[/caption]

Directed by Ayan Mukerji, Brahmastra is a fantasy adventure trilogy. Its first part is scheduled to release on Christmas 2019.