Priyanka’s fascination for a veil during wedding made Nick witness a déjà vu moment from Met Gala; we’ll explain 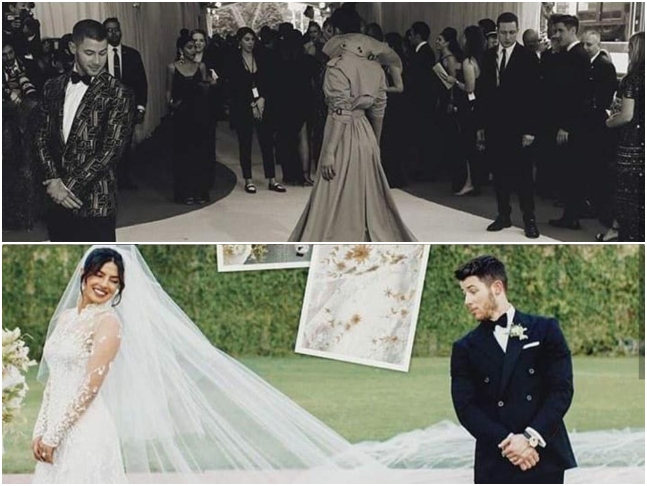 By now, we are sure that you are aware of the fact that love blossomed for Priyanka Chopra and Nick Jonas before they met at the Met Gala in 2017. Well, Priyanka and Nick are married now and the fact of the matter is that we found a picture of the couple from their wedding that will remind you of a moment – that both were a part of during the Met Gala.

Priyanka, dressed in a Ralph Lauren gown for her Christian Wedding, also wore a 75-foot long veil and in a picture that has emerged from the ceremony, depicts that Nick was absolutely stupefied by it. Judge for yourself:

Recommended Read: Priyanka Chopra and Nick Jonas seal it with a kiss in viral pic from their Christian Wedding ceremony

And take a look at this picture now. We’re sure it will be a déjà vu moment for you as much as it was for Nick.

Nick and Priyanka married in a two-part wedding ceremony at the Umaid Bhawan Palace in Jodhpur – on December 1 in a Christian wedding and as per Hindu traditions on December 2. After the wedding, Priyanka and Nick hosted a reception at The Taj Palace Hotel in New Delhi on December 4 in honour of Prime Minister Narendra Modi while the event was held in the presence of close friends and family.