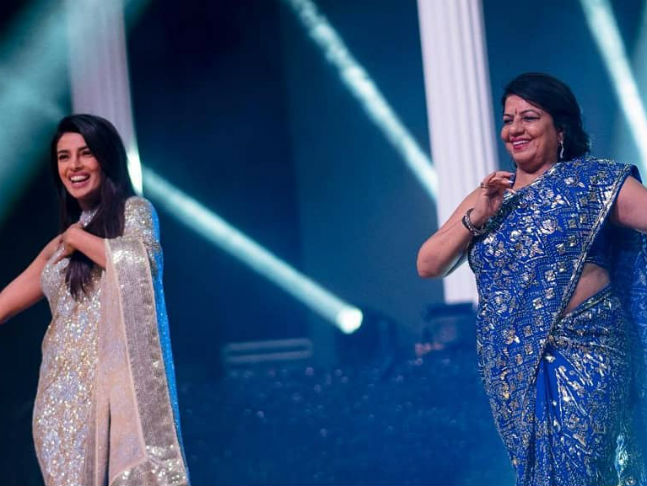 Out of the pictures shared by Priyanka Chopra from her pre-wedding ceremonies and shaadi on social media, her sangeet album is our personal favourite – the event, which has been described by the 36-year-old actress’ mother Madhu Chopra as “vibrant and energetic”. Priyanka’s sangeet, held in Jodhpur reportedly on November 30, was nothing short of grand as it included dance performances by the actress and her mother apart from Nick Jonas and his brother Joe Jonas’ partner Sophie Turner.

“It was lovely. Sab dance kar rahe the sangeet pe and everyone was enjoying themselves. The entire atmosphere was vibrant and energetic,” Madhu Chopra told a leading daily while reminiscing sangeet memories.

Nick and Priyanka photographed at their sangeet in Jodhpur.[/caption]

In footage made available by Priyanka from her sangeet, Joe was seen performing on stage as well while Priyanka’s sister Parineeti Chopra also displayed her dance steps. The couple’s friends from the west also put up a brilliant show – the ceremony was choreographed by Ganesh Hegde. Priyanka wore a beautiful saree for her sangeet while Nick was handsome in a blue kurta and white pyjamas.

Nick and Priyanka married in a two-part wedding ceremony at the Umaid Bhawan Palace in Jodhpur – on December 1 in a Christian wedding and as per Hindu traditions on December 2. Only 225 guests and family members attended the ceremonies including mehendi and sangeet, and the two-part wedding in Jodhpur including Salman Khan’s sister Arpita Khan Sharma, Isha Ambani, Priyanka’s sister Parineeti Chopra, Nick’s brother Joe Jonas and his partner Sophie Turner.

Priyanka and Nick hosted a reception at The Taj Palace Hotel in New Delhi on December 4 in honour of Prime Minister Narendra Modi while the event was held in the presence of close friends and family. Reports suggest that Priyanka and Nick will host a reception for her friends and colleagues from the film fraternity in Mumbai in due course of time but no official date has been announced by the couple.