Advertisement
HomeBOLLYWOODENTERTAINMENT NEWSPriyanka Chopra and Nick Jonas enjoy pure ‘marital bliss’ in Oman; Is this pic from their honeymoon?

Priyanka Chopra and Nick Jonas enjoy pure ‘marital bliss’ in Oman; Is this pic from their honeymoon? 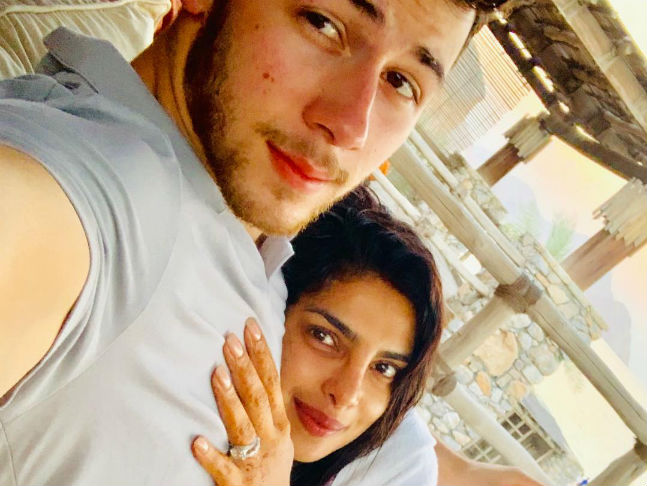 Priyanka Chopra posted a delightful picture of herself with husband Nick Jonas on Instagram, in all probability, from Oman and the internet is of the opinion that the couple is on their honeymoon. “Marital bliss they say,” reads Priyanka’s caption of her loved-up post that has already garnered millions of likes within hours of being made available online.

Recommended Read: Instead of Priyanka, ask Nick about honeymoon plans; It’ll be a surprise, that’s what my husband’s planning, she says

On Priyanka’s Instagram story as well, we found this picture – it might appear cliché but it’s definitely cute.

Fan clubs, in the meantime, shared pictures of the luxurious destination that also features an outdoor cinema theatre, where Priyanka and Nick watched Elf together. Sun, sand and the sea – Priyanka and Nick are making the most of their apparent honeymoon at the beautiful resort.

Interestingly, Priyanka had told a leading channel during an interview after her wedding that honeymoon wasn’t on the cards at the moment since she as well as Nick are busy with professional commitments. However, Priyanka did add that Nick was planning a surprise of sorts as far as their honeymoon is concerned. It was Oman, then, right Priyanka?

Nick and Priyanka married in a two-part wedding ceremony at the Umaid Bhawan Palace in Jodhpur – on December 1 in a Christian wedding and as per Hindu traditions on December 2. After returning from Jodhpur, Nick and Priyanka hosted a reception at The Taj Palace Hotel in New Delhi on December 4 in honour of Prime Minister Narendra Modi while the event was held in the presence of close friends and family.

Priyanka and Nick photographed during their wedding.[/caption]

Reports suggest that Priyanka and Nick will host a reception for her friends and colleagues from the film fraternity in Mumbai on December 20 but no official confirmation has been made on this aspect by the couple.