Our kids need to learn about real battles and not just PUBG, says Akshay Kumar 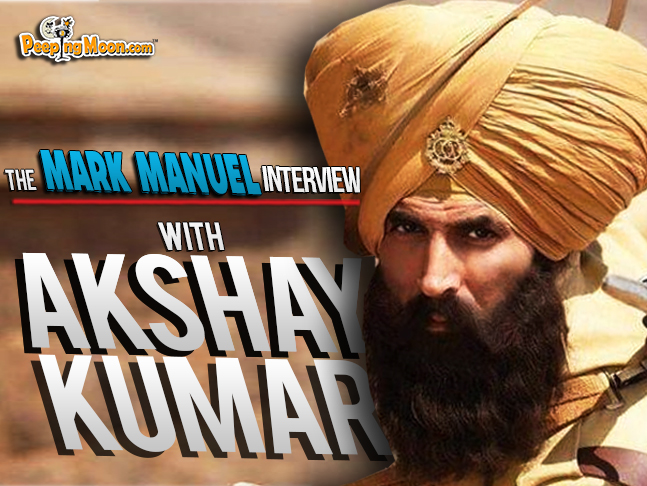 Akshay Kumar’s flight was late. He was returning from Ahmedabad. He had gone there to promote Kesari – his new film on the historic Battle of Saragarhi of 1897. His vivacious co-star Parineeti Chopra was traveling with him. I was waiting at the airport. Outside the General Aviation Terminal at Kalina. Where private jet owners land. And the lucky few who can’t be bothered by the delays and cancellations of our passenger airlines catch chartered flights from. Akshay’s car, a big silver grey Merc, waited in the sun with me. Its engine purring. I was to interview him while he drove to PVR Juhu for his next promotion of Kesari.

I have done this before. He is Bollywood’s busiest actor. He makes four films a year. His time is important. He makes every minute count. And Kesari promotions had him on the run. I figured we had 20 minutes talking time. But I had not planned on Parineeti hitching a ride with us. It was going to be claustrophobic in the car. Three of us on the back seat. His driver and bodyguard in front. Akshay already had a solution. He swept out of the terminal alone and in a hurry.

Paused graciously for selfies with the security personnel manning the gates. Then pushed me into the car saying, “Let’s talk while Parineeti changes and gets her makeup and hair done.” This was happening in the Ladies’ Restroom of the private airport. Akshay was casually dressed himself. In black tracks and jacket. A shiny grey tee. And the shadow of a salt-and-pepper stubble that matched his clothes. I looked at my watch anxiously. He noticed, gave my hand a squeeze, smiled and said, “We have time.”

Recommended Read: Kesari Review: The Josh in the film is in Akshay Kumar’s killer attitude

The Battle of Saragarhi has been the subject of a web series earlier and was considered by Bollywood before. What’s different about it in Kesari?

We have made a commercial film. There are songs and fights, there is emotion and romance, because I am a commercial actor. I need to do films in a commercial way. Even in Airlift I did songs. It was a true story of the evacuation of the Indians stranded in Kuwait after Iraq’s invasion in 1990. But we had to add masala to it to make it interesting. That’s what happened with Kesari also. It’s a two-day story. The first day when my character, Havildar Ishar Singh, is shifted to Saragarhi. And the second day when 10,000 Afghans attack the fort and the 21 Sikh soldiers stationed there defend it and get killed in battle.

I believe in the film and I love my character. There’s something in Kesari that you would not have seen in many war films.

Had you heard of the Battle of Saragarhi before Kesari?

Just a little bit. Certainly not as much as I know after Kesari. And that’s the whole idea behind the film. I want to share it with the youth. I want parents to show it to their children. Because Kesari is an educational and inspirational film. And I want kids to know what the 21 Sardars did for the country, for their honour, for their Gurus, they went out to battle knowing they were heavily outnumbered and the Afghan invaders were waiting to kill them. They had the opportunity to escape but they didn’t turn their backs on the enemy. They went to war and didn’t allow the invaders to enter the motherland and became martyrs in the battle. It is a beautiful story and a real story. Our audiences got so fascinated by the Hollywood film 300 which is fictitious. We thought the 300 Spartans fighting 8,000 Persians was commendable. But wait till you watch the real story of the Battle of Saragarhi in Kesari of 21 Sikhs fighting 10,000 Afghans.

Akshay Kumar in a still from Kesari

Do you believe the kids of today need heroes?

It’s a pity we didn’t learn about the Battle of Saragarhi in school.

That’s because it was never mentioned in our history books. You are right. I didn’t hear about it, too. It’s like the Battle of Saragarhi vanished from the pages of history! And yet, it’s the second biggest last-stand in world history. It comes up on Google if you search the Internet.

There are so many things the kids of today need. We don’t want them to get disconnected with reality and be involved with the battles of online games like PUBG only.

You told me during Gold, another period film, that you never research your character and leave this to the film’s director. So was Ishwar Singh fleshed out by Kesari director Anurag Singh?

I never research my characters and leave it to my director because I am working on four films at a time and he’s doing only one. Kesari is not the vision of Anurag but that of the original writer. Anurag made a few changes that Karan Johar and I loved. Anurag told me all there was to know about my character. I just breathed life into Ishar Singh.

A poster of Kesari

I believe in the film and I love my character. There’s something in Kesari that you would not have seen in many war films. And that’s what goes on in a soldier’s mind in the last 35-40 seconds after he’s been hit by bullets and knows he’s going to die. You don’t immediately die unless you get shot in the head. And the soldier knows all he has is about 35-40 seconds left. Imagine what his emotions are at that moment. After Kesari I came to understand what such a soldier goes through. He’s not thinking about the enemy anymore. He’s thinking about his family. About his wife and children waiting for him at home. He’s thinking about the friends with whom he used to play gilli-danda and cricket. The whole life of this mortally injured soldier flashes before his eyes in those last 35-40 seconds. And at that time if the enemy comes and shoots him again, the soldier dies with a smile on his face because he’s at peace, he’s just met them – his wife and children and friends.

The uniform and turban together brought about a mind-blowing change in me during the making of Kesari. I felt such an overwhelming sense of pride and glory

That’s where Parineeti’s character in Kesari comes in?

The wife of a soldier plays a very important role. She’s not present with him at the battle front during the war but the soldier tends to talk to her. He’s visualising his wife or hallucinating or whatever. But he actually talks to his wife and children. Today, soldiers stationed anywhere in the world can FaceTime their families, they can video chat with them on Skype or Whatsapp. Before that, they used to talk to photos of their loves ones that they carried in their uniform pockets. And earlier, during the Battle of Saragarhi, they were more advanced – they could visualise their wives and children! That’s what Parineeti’s role is about.

A still of Akshay Kumar and Parineeti Chopra from Kesari

In Kesari you’ve got on a soldier’s uniform and worn a Sikh turban, and both these are a high for you always. Together, what do they mean?

The uniform and turban together brought about a mind-blowing change in me during the making of Kesari. I felt such an overwhelming sense of pride and glory, I was infused with such great strength, that it was simply unbelievable.