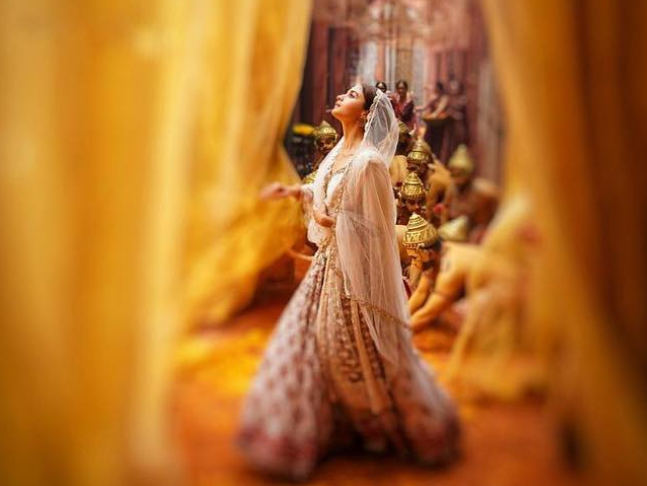 Karan Johar’s upcoming period drama Kalank, featuring an ensemble cast including Alia Bhatt, Varun Dhawan, Sanjay Dutt, Sonakshi Sinha, Kunal Kemmu, Madhuri Dixit and Aditya Roy Kapur, is undoubtedly one of the most awaited films of the year. Directed by Abhishek Varman, the film has managed to keep the audience hooked ever since its announcement.

Now after unveiling the teaser and character posters from the film, Karan Johar has amped up our excitement by sharing a still of Alia Bhatt in her character Roop. He captioned the post as, "She is ROOP! Torn between commitment and love."

RECOMMENDED READ: Karan Johar’s birthday present for Alia Bhatt is a new poster of her character Roop from Kalank

In the still, the 26-year-old actress can be seen in an all-white traditional outfit as she stands in the middle of yellow curtains. Not to miss, the 'vanarsena' from Ramleela can be seen in the background. Alia shared the same still on her Instagram handle to reveal that the still is indeed from a film's song, which will come out soon and has given her 'sleepless nights, days and months'. The actress is said to have done some kathak moves in the upcoming track, Ghar More Pardesiya.

Kalank is rumoured to be a love story, conceptualized in the backdrop of the partition, and began filming in May 2018. As per the reports, Kalank has been shot over a period of 100 days in Hyderabad, Chanderi, Madhya Pradesh, Kargil and Indore apart from Mumbai. It is slated to hit the silver screens on April 17, 2019.