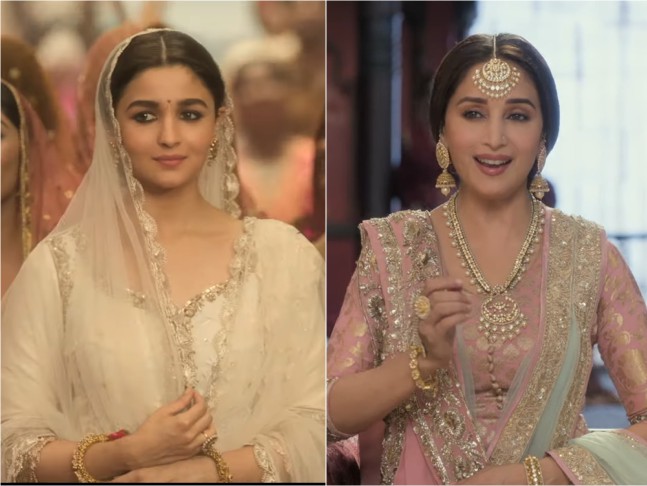 Alia Bhatt’s mesmerizing Kathak performance in the song Ghar More Pardesiya from Abhishek Varman’s Kalank fetched the young actress a double thumbs-up from her co-star and that gracious danseuse Madhuri Dixit. The song in the period drama, which the cast referred to as the ‘Ramayana song’ on the sets, is a beautiful jugalbandi between the two. Written by Amitabh Bhattacharya and composed by Pritam, Ghar More Pardesiya was choreographed by Remo D’Souza.

Set against the background of the Ramayan festival, and packed with a number of classical artistes who lend grandeur and purity to the track, Ghar More Pardesiya celebrates love from Sita’s point of view. It plays out on the streets of Hira Mandi in Husnabad and shows Alia dressed in white lehenga with a dupatta over her head surrounded by men in Vanar Sena costumes (forest dwellers in the Ramayana) while Varun Dhawan prowls panther-like in her wake.

Ghar More Pardesiya is Alia’s song. Madhuri, who shares it with her, watches with a sense of unbelieving pride as Alia dances gracefully. “Luckily she wasn’t dancing too,” Alia told Peeping Moon. “I was very scared and nervous and she understood that and was very supportive in her instructions and in helping me out. Especially in the spinning movement around her because I was wearing a heavy lehenga and it was very fast. When we finished the take, I didn’t know how I had fared, but Madhuri gave me a silent double thumbs up and then I heard Remo saying “Okay!”