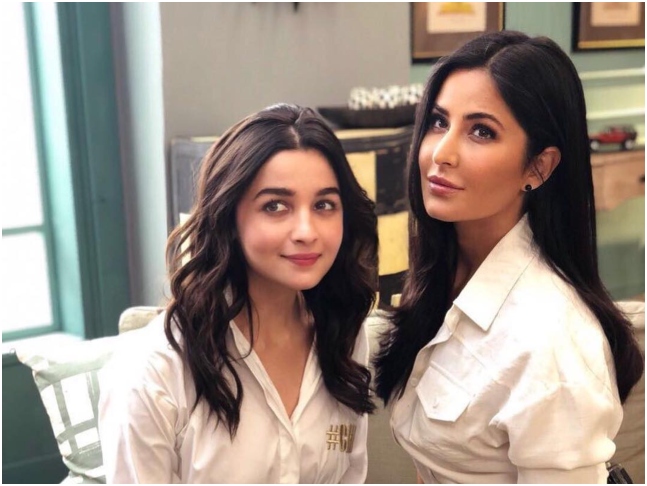 Alia Bhatt’s new song Ghar More Pardesiya from her upcoming film Kalank has impressed everybody including Katrina Kaif. On her Instagram story, Katrina shared a still of Alia from the song and wrote about her beautiful dance performance, saying, “Ghar More Pardesiya, Alia Bhatt. How beautifully you’ve danced,” and Alia is more than delighted to see the note.

“You’ve no idea what your approval means to me…Love you Katyyy. #topchick,” Alia wrote in response to Katrina’s message. True that, Katrina. Alia, indeed, was mesmerizing in Ghar More Pardesiya.

In Ghar More Pardesiya, Alia’s Roop performs Kathak in Madhuri Dixit’s Bahaar Begum’s dance class with several others and boy, she is beautiful. The song has vocals by Shreya Ghoshal with Vaishali Mhade while Pritam has composed it. Lyrics are by Amitabh Bhattacharya while Remo D’souza has choreographed it.

Alia and Madhuri in a still from Ghar More Pardesiya[/caption]

Kalank is rumoured to be a love story, conceptualized in the backdrop of the partition. The film has been co-produced by KJo under his banner Dharma Productions and is scheduled to release on April 17.