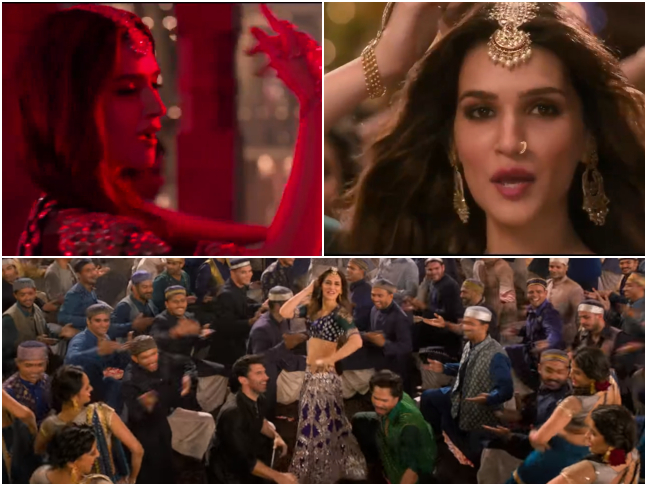 Karan Johar’s and Sajid Nadiadwala’s ambitious project Kalank is about to release on April 17 and the makers are leaving no stone unturned in ensuring that the audience’s interest in the period drama increases with every passing day. After releasing the character posters, trailers and a couple of larger-than-life songs, now another song featuring Kriti Sanon is about to be unveiled tomorrow.

Karan teased the fans with a small clip of the song Aira Gaira where we see Kriti oozing oomph in a black lehenga. Aditya Roy Kapur and Varun Dhawan who star in the film are also seen having a great time and bonding together on the song. In fact, Karan’s caption also indicated the fact that the song will cement the lead actors friendship in the film. He captioned the post as, “With @kritisanon & the boys, tomorrow will be studded with double the stars! #AiraGaira out tomorrow!!
#5DaysToKalank #Kalank @duttsanjay @adityaroykapur @[email protected] @aslisona @[email protected] @karanjohar#SajidNadiadwala @[email protected] @[email protected]@zeemusiccompany.”