Vivek Oberoi slammed Kamal Haasan on Twitter today for saying that independent India’s first terrorist was a ‘Hindu’. Haasan was alluding to Mahatma Gandhi’s assassin Nathuram Godse while he was campaigning at Aravakurichi in Tamil Nadu on Sunday night. Vivek questioned Haasan’s motive for the remark on the Hindu community and alluded to the fact that it was 'because he was speaking in a Muslim dominated area'.

Please sir, from a much smaller artist to a great one, let’s not divide this country, we are one Jai Hind #AkhandBharat #UnDividedIndia

RECOMMENDED READ: Vivek Oberoi's PM Narendra Modi biopic gets a release date, to now hit the screens on May 24 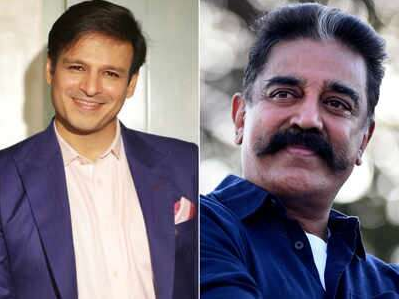 Haasan was speaking at a rally ahead of the by-elections in Aravakurichi in Tamil Nadu and said, “I'm not saying this because this is a Muslim dominated area. I'm telling this because it’s in front of the Gandhi statue. Independent India's first terrorist was a Hindu. His name was Nathuram Godse. It starts from there. I'm Gandhi's great-grandson. I'm here to seek justice for that murder. I'll thump my heart and say that I'm a good Indian and any Good Indian will want the country to be peaceful and equal to all. He will always want the tricolours of the national flag to remain the same always.”

Haasan is the founder of the political party Makkal Needhi Maiyam (MNM) is fielding S. Mohanraj from the segment that is a Muslim-dominated area. Haasan’s statements have caused a furore on social media as well and he has been receiving a lot of brickbats and backlash for likening an assassin who was hanged for his crime with terrorists who claim multiple innocent lives.