Shahid Kapoor has managed to create a storm at the box office with Kabir Singh as the film crossed the coveted 100 crore club within just five days of release. But the success of Kabir Singh isn't sweet enough for the actor with the heated atmosphere that has enveloped around him due to the subject of the film. It isn't wrong to say that the house is divided between those who absolutely loved the film and those who trashed the film by calling it misogynistic and the proof of this is the comments received by Shahid on his Instagram account. Although the lead actors of the film- Shahid and Kiara Advani have maintained their silence on negative remarks, the kin of Shahid couldn't keep calm and gave a piece of mind to naysayers. Shahid's half brother Ishaan Khatter and his mother Neliima Azeem penned replies in strong words and slammed people for not treating it like cinema.

Ishaan, while replying to one user said, "No, actually it’s quite the opposite. It’s an appreciation post for a gem of a human being and an actor par excellence. As for your read on the film, it’s cinema. Everybody should have an opinion. I don’t agree with yours. But that’s a conversation for another day enjoy your day!" 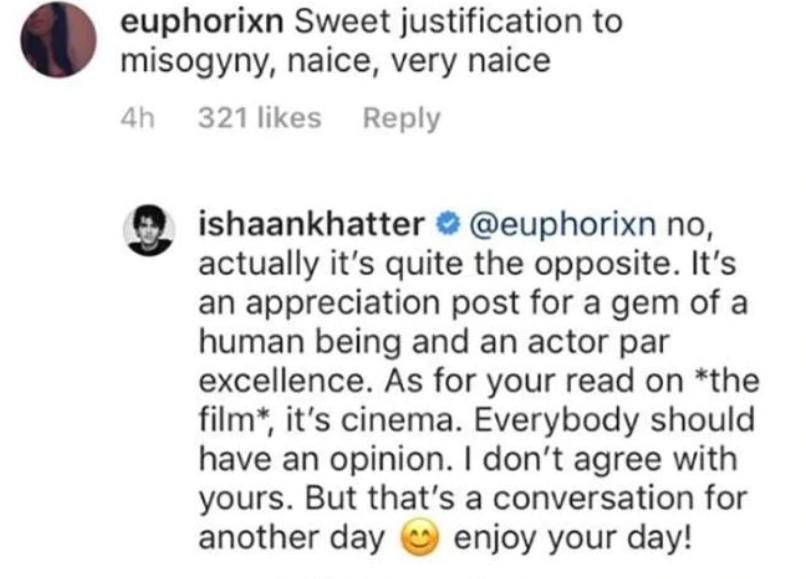 Neliima, on the other hand, wrote, "Friends what we need to understand is Kabir Singh is a film which is an A certificate film...All the great films down the ages be it scar face, a street car named desire or even godfather or the recent a wolf on wall street would have to be scrapped ..great films with stupendous performances. Our adult audiences are intelligent enough to understand the difference between reel and real life...appreciate the film the narrative the music and the powerhouse performance...its rare to see so much a film gives you...love." 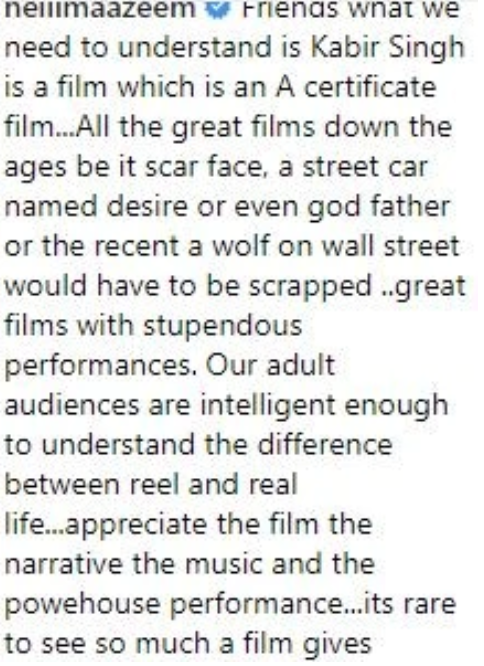 Speaking of Kabir Singh, the film is about a Mumbai based surgeon suffering from poor anger management and alcoholism. He roots for substance abuse after his girlfriend Preeti, whom he met at the medical college where he studied, gets married off to someone else. Directed by Sandeep Reddy Vanga, the film is an official remake of the Telugu superhit Arjun Reddy.