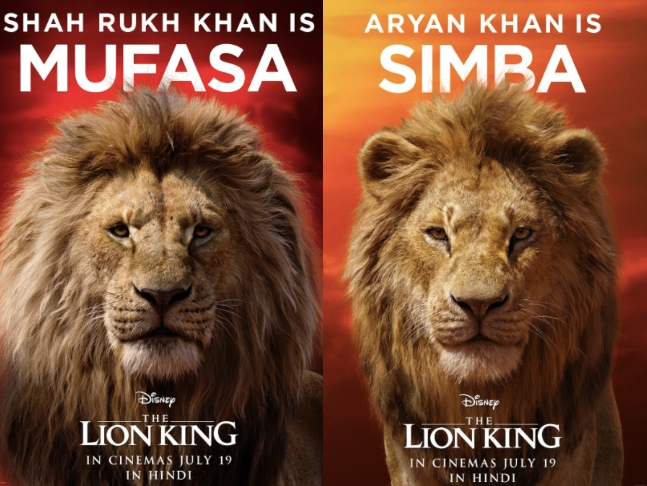 Superstar Shah Rukh Khan, overwhelmed by the response he received for the Hindi version of Disneys "The Lion King", has thanked his co-actors for making him and son Aryan sound good in the live action film. "Happy to hear that so many are enjoying ‘The Lion King'. A special thanks to my co-actors and friends for bringing this film to life in Hindi. Sanjai Mishra, Shreyas Talpade and the amazing Ashish Vidyarthi and Asrani sahib. Thanks for making me and Aryan sound good," Shah Rukh tweeted on Sunday.

So happy to hear that so many r enjoying Lion King. A special thanx to my coactors & friends for bringing this film to life in Hindi. @imsanjaimishra @shreyastalpade1 & the amazing @AshishVid & #asrani sahib. Thx for making me & Aryan sound good!

"The Lion King" made Rs 13.17 crore business on its opening day in India. It opened across 2,140 screens on July 19 in English, Hindi, Tamil and Telugu. The film is director Jon Favreau's retelling of the 1994 Disney classic of the same name, with photo-realistic, computer-generated animation, and it brings back the adventures of Simba, set to succeed his father Mufasa as King of the Pride Lands. It narrates the tale of Simba rising to the occasion despite several attempts by his uncle Scar to bring him down.

The star-studded voice cast of the original Hollywood version includes Donald Glover, Beyonce Knowles, Seth Rogen, Alfre Woodard, Chiwetel Ejiofor, Billy Eichner, John Kani and John Oliver. Actor James Earl Jones is also reprising his role of Mufasa from the original. Back home, the Hindi dubbed version cashes in on Shah Rukh Khan's stardom. SRK has lent his voice to Mufasa in the Hindi version, and his son to Simba.