Comedian Mallika Dua had a major accident that could have been fatal. The comedian actress posted a few videos on Instagram, criticizing Delhi Chief Minister Arvind Kejriwal and the Delhi Police for the lawlessness and alleged apathy. Mallika took to her Instagram to share videos and photos about the accident and slammed the CM and police.

Apparently, a big stone stuck the window of Mallika’s car on the same side she was sitting. However, she escaped unhurt as there was a net on the window. She did not stop the car as she feared that it was the doing of some miscreants. She posted a video and warned her followers that if something like this ever happens to them then they should never stop the car. 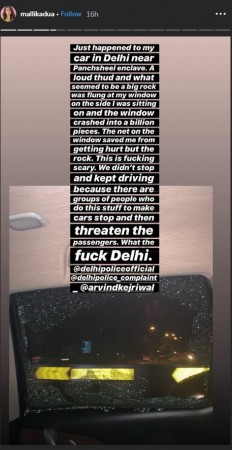 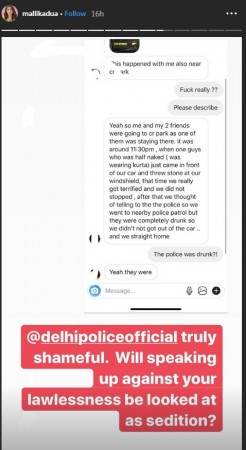 She narrated the incident on Instagram and wrote, “Just happened to my car in Delhi near Panchsheel enclave. A loud thud and what seemed to be a big rock was flung at my window on the side I was sitting on and the window crashed into a billion pieces. The net on the window saved me from getting hurt but the rock. This is fu**ing scary. We didn’t stop and kept driving because there are groups of people who do this stuff to make cars stop and then threaten the passengers. What the f*ck Delhi.”

The way Mallika narrated the story it surely looked as if the actress had a very close call. Her window was completely shattered and such stories on roads at night have become pretty common. Hopefully, her incident will make the authorities alert and cautious and will cub such happenings.