Advertisement
HomeBOLLYWOODENTERTAINMENT NEWSWondering when is Priyanka Chopra Jonas collaborating with husband Nick Jonas for a duet? The actress finally answers

Wondering when is Priyanka Chopra Jonas collaborating with husband Nick Jonas for a duet? The actress finally answers 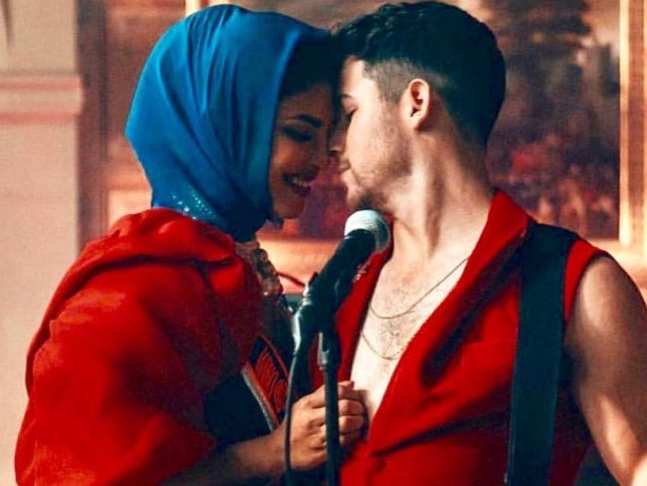 Priyanka Chopra Jonas has been casting her magic, not just in Bollywood but in Hollywood too and there ain't a denial. From acting to production, there is barely anything that the actress hasn't touch upon. While Priyanka keeps delighting us with excellent narratives onscreen, she is a treat to the ears with her melodious renditions at regular intervals. Ever since she released her first single titled In My City in 2012 featuring American rapper Will.I.Am, Priyanka has built a special fan following for the songs. And now that she is married to the famous American pop singer Nick Jonas, her fans are desperately waiting for a musical collaboration. However, the Mary Kom actress starred in Nick's Sucker video in a special appearance, she is yet to sing a duet with him. But, unfortunately, the dream of a duet won't be coming true. Well, yes.

Priyanka, during her appearance on a musical chat show, told that although she is interested in music, a duet won't be possible as she doesn't have any formal education in it. The actress further called Nick a 'child prodigy' who makes songs, writes lyrics and composes music while she is just a patron. In terms of singing, Priyanka has lent her vocals to songs like Exotic and a Marathi song titled Baba for her home production's film Ventilator. Workwise, Priyanka was last seen in Shonali Bose's The Sky Is Pink. She is currently shooting for the Netflix web film The White Tiger with Rajkummar Rao.

Speaking of Nick and Priyanka, the couple will be completing a year of togetherness on December 1.