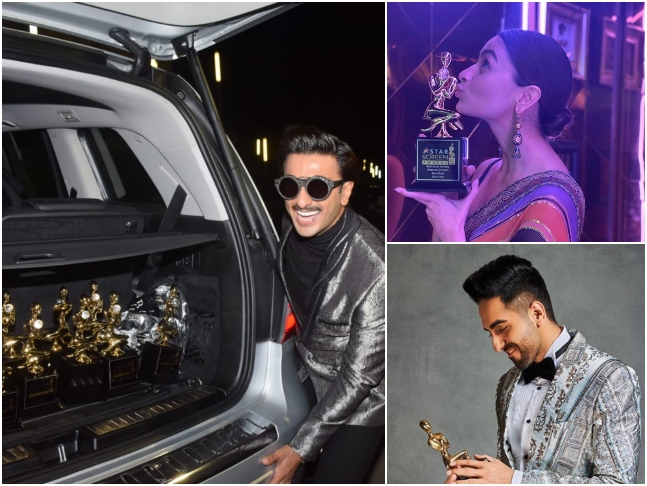 It won't be wrong to say that 2019 was one of Bollywood's best years. From tales that shook us to quirky narratives that changed our perception towards the way we look at flaws, filmmakers left no stone unturned to present the audience with a variety of fresh content teamed with great actors/actresses. Now, as the year inches closer to its end, the official awards season in tinsel town began with the Star Screen Awards held on Sunday.

With films like Gully Boy, Article 15, War, Kabir Singh, Saand Ki Aankh, Uri: The Surgical Strike having proven to be winners at the box-office, these projects won big at the awards night and took home the prestigious trophy rightfully. The night played witness to Ranveer Singh, Alia Bhatt, Ayushmann Khurrana, Sara Ali Khan and others bag the Screen Awards trophy for their impeccable talent. While Ranveer and Alia took home the Best Actor Male and Female respectively, Ayushmann as Best Actor Male in the critics' segment. Veteran actor Prem Chopra was honoured with the Lifetime Achievement Award while Kamini Kaushal won the Best Supporting Actress Female for Kabir Singh.

Gosh! Double Whammy! ‘Best Actor in a Leading Role’ for #GullyBoy & ‘Entertainer of the Year’ at the #StarScreenAwards

Entertainer Of The Year: Ranveer Singh and Shahid Kapoor 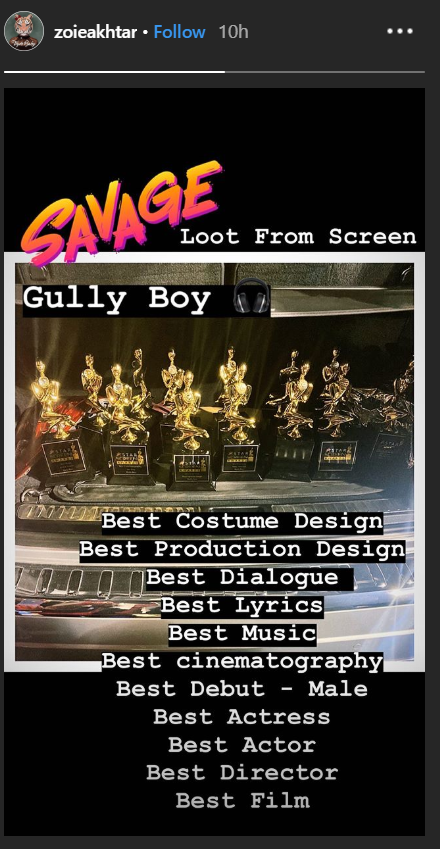 Thank you star screen and the jury for this honour.Saand Ki Aankh and Chandro Tomar will always be special. My first award is a tribute to @shooterdadiofficial @shooterdadi and @sumitrapednekar @taapsee congratulations Bebe..this moment is so special @tusharhiranandani @nidhiparmarhira thank you for making this film and I just love you both The entire cast and crew #starscreenawards2019 #bestactorfemalecritics

I hope @tusharhiranandani after this you never have to answer the question that why you took ‘us’ to play older characters! Thank you jury at #StarScreenAwards for this acknowledgement and our two ‘Hira(s)’ @tusharhiranandani and @nidhiparmarhira who really toiled hard for this one. Thankq @shooterdadiofficial @shooterdadi for trusting us with your story. And my dear ‘Jiji’ @bhumipednekar ...... yo toh hona hi tha

Thank you Papa and Ma for making this possible. Thank you #StarScreenAwards for this moment of pride for my parents, and thank you to all my peeps, Pyaar mila hai aapka! Boht pyaar! Boht Hard! #MostPromisingNewComer

Thank you Star Screen Awards for the best Debut Award This one is for the entire cast and crew of Kedarnath Thank you to everyone that made it possible for me to call myself ‘an actress’- which was my ultimate dream, is my most favourite adjective‍, and will always be something that I promise to try and get better and better at ‍#jaibholenath

Thank you #StarScreen2019 for “Fresh Face of the Year” my first film award and it’s truly so so so special wouldn’t be here without @karanjohar @punitdmalhotra , my most special team, and all of YOU who love and support me THANK YOU #blesssed #grateful #TooooExcited

Thank you #StarScreenAwards jury and audiences for the award and honour. Couldn’t be there tonight as I was out of town. But I am so overjoyed! #GharMorePardesiya is a very special song for me. Thank you @ipritamofficial da for this gem!