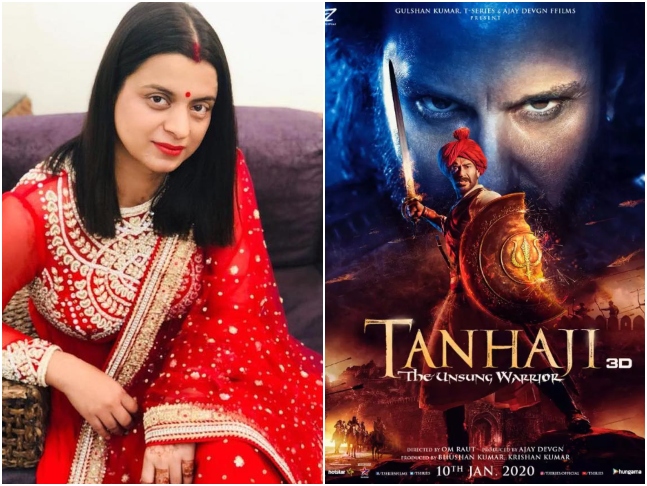 Ajay Devgn's and Saif Ali Khan's much-awaited Tanhaji: The Unsung Warrior has finally hit the screens on Friday. While the film hasn't just received a thumbs up from the critics but also from fans of the actors and B-Town members. Amongst several who lauded Ajay and the team of Tanhaji was Kangana Ranaut's sister Rangoli Chandel. Rangoli, an active social media user, on Friday, tweeted in admiration of the period drama. In the note that nothing but pure appreciation, Rangoli thanked Ajay for giving the Maratha warrior his due. She then said it is the audience' responsibility to make the film a super hit.

Tanhaji: The Unsung Warrior is based on the Battle of Sinhagad in 1670 which was fought between Tanaji Malusare, a commander of Chhatrapati Shivaji Maharaj and Udaybhan. Saif plays Rajput officer, Udaybhan Rathod, who served under Mughal army chief Jai Singh while Kajol will be seen as Ajay's onscreen wife Savitribai. The film is directed by Om Raut and produced by Ajay’s ADF and Bhushan Kumar’s T-Series. It released on January 10, 2020, in 2D and 3D.