Advertisement
HomeBOLLYWOODENTERTAINMENT NEWSOwing to the Coronavirus lockdown, 67th National Film Awards scheduled to be conducted on May 3, now delayed indefinitely

Owing to the Coronavirus lockdown, 67th National Film Awards scheduled to be conducted on May 3, now delayed indefinitely

COVID-19 pandemic has taken over the world due to which several important events and award shows are getting cancelled amid the nationwide lockdown. Now, National Film Awards, which honours excellence in the entire national spectrum of Indian cinema, which is conducted on May 3 every year, stands delayed until further notice.

Reports state that this time the date falls within the lockdown period in the country, owing to the ongoing global crisis. Reports also state that there have no discussions as of now regarding the annual gala, as officials are currently concentrating, more importantly, on tackling the coronavirus situation, a source said. Filmmaker Rahul Rawail, who was the National Film Awards jury head last year, says the process of putting together a jury was "about to start" before the coronavirus scare took a more serious turn in India. 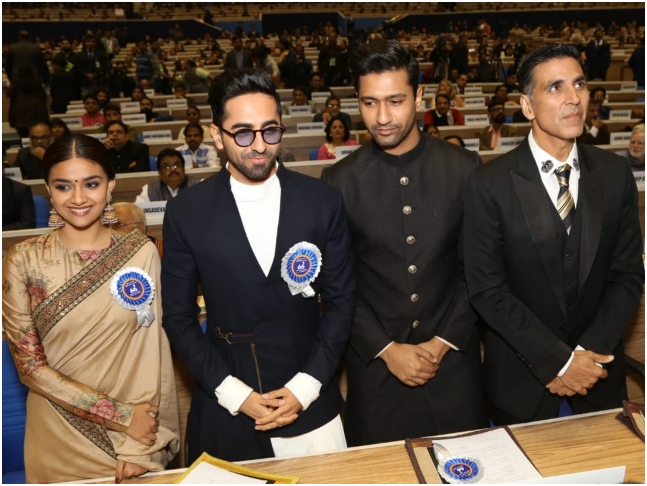 He said, "The jury itself has not been assembled as yet. And we can’t blame the government, as they are trying to do their best and their priorities are much bigger right now. They can’t do anything until the lockdown is lifted completely." Rahul also said that with hardly any movie releases in 2020, he thinks "it won’t be fair to have" a National Film Awards next year at all.

"There are no film festivals happening really around the world... I think this year has practically gone off from the calendar as far as the film and TV industry goes. The government is as worried as film people are, but their priorities are different, and (the focus is on) getting things back on track (nationally)... We can’t expect the government to stop everything to look after films," he said.

Pinch 2: Anil Kapoor reacts to trolls saying 'he lives with plastic surgeons' and 'drinks snake blood' to look young, asks 'Is this genuine or did you people pay them to say this'

Shilpa Shetty to make her OTT debut, to sign a role similar to Sushmita Sen's character in Aarya?

After Ajay Devgn, Vicky Kaushal to test his survival instincts in 'Into The Wild With Bear Grylls'