Advertisement
HomeBOLLYWOODENTERTAINMENT NEWSIt was an extremely callous act to joke about the deceased: Irrfan’s and Sridevi’s Pakistani co-star Adnan Siddiqui apologizes after a TV show host made a distasteful comment about the late actors' death

It was an extremely callous act to joke about the deceased: Irrfan’s and Sridevi’s Pakistani co-star Adnan Siddiqui apologizes after a TV show host made a distasteful comment about the late actors' death

Pakistani actor Adnan Siddiqui who worked with late actors Sridevi and Irrfan in films Mom and A Mighty Heart respectively found himself in an uncomfortable situation and has apologized for being a part of an interview where the host made a distasteful joke on the acclaimed Indian actors. The show host joked about the death of the two acclaimed actors and how since Adnan worked with them they are no more. Adnan has distanced himself from the controversy and released his statement about his reaction and displeasure to the incident on social media.

The statement read, “So I don’t know how to explain what I’m feeling right now or what to say. But this needs to go out. I was invited on the live chat show ‘Jeewey Pakistan’ yesterday when this unfortunate incident happened. The anchor Amir Liaquat Sahab joked about something extremely sensitive. Not only were they both close to me but also as a human it was wrong on so many levels. I cannot even call it ‘hitting below the belt’.”

RECOMMENDED READ: Irrfan's son Babil remembers his father as he shares a sketch ft. the late actor asking for a good script from God

He added, “It was an extremely callous act to joke about the deceased. This is in very bad taste, not only does it show him and me but also the entire country in bad light. I want to apologise to the families of Sridevi Sahiba and lrrfan Khan Sahab, their loved ones and fans. If you see my body language I was extremely uncomfortable with what he said but I didn’t want to stoop to that level. I regret being on the show. I’ve learnt my lesson and I promise I will not tolerate such an act in future. I was hoping this bit wouldn’t become public but unfortunately it has. I’m sorry. Thank you.”

Adnan Siddiqui with Sridevi in Mom

The joke was extremely distasteful in nature. The host Amir Liaquat had joked that how the actors Adnan worked with are no more. He made fun of him for refusing Rani Mukerji’s Mardaani 2 and said that probably ‘saved the lives’ of the film’s principal cast. 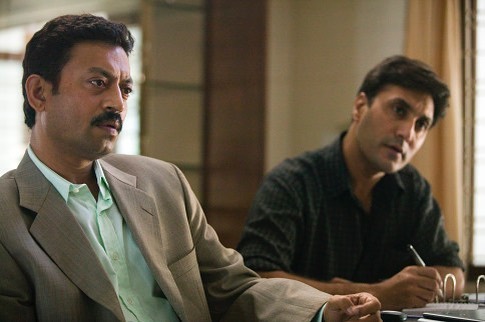 Adnan Siddiqui with Irrfan in A Mighty Heart

Adnan had played Sridevi’s husband in Mom whereas he also starred alongside Irrfan in A Mighty Heart that had Angelina Jolie as the female lead. The film was produced by Brad Pitt. Sridevi passed away on February 24, 2018, while Irrfan breathed his last on Wednesday, April 29, 2020, after battling neuroendocrine tumour for the last two and a half years. Their death left a deep void and was mourned by their millions of fans across the globe.
(Source: Twitter)