The Indian Government has banned 59 Chinese apps in India that includes the highly popular video sharing platform TikTok. The TikTok ban has received mixed reactions in Bollywood. While many celebrities have welcomed the ban there are quite a few naysayers who are wondering about the significance of the ban. TikTok, owned by China’s ByteDance is a hugely popular app and many celebrities are also present on the platform. The app has an estimated 120 million users in India.

Celebs like Malaika Arora, Nikitin Dheer, Amrita Rao hailed the government’s approach towards TikTok. Malaika shared a picture on her Instagram stories and wrote, “Best news I have heard in lockdown...finally we will not be subjected to people’s ridiculous videos.” Nikitin called it a ‘goood start’ and wrote, “It’s so funny that so many people are saying apps ban karne se kya hoga...well it’s a start. A start to cutting off revenue, spyware, malware etc. And m****s asking why don’t we attack China... it just shows how ignorant you are, army doesn’t need our advice on how to , if you have not read, a lot of industrial contracts have been cancelled. Be patriotic, it’s cool...Thodi apni bhi akal lagao. Jai Hind!!” 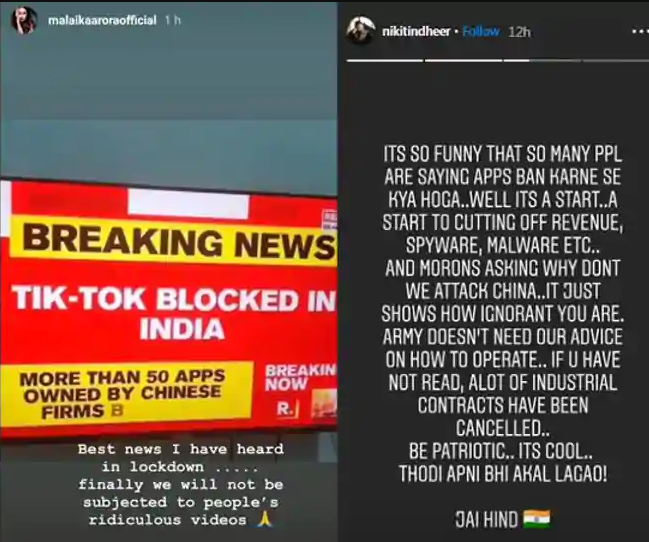 RECOMMENDED READ: Malaika Arora's India's Best Dancer to resume shoot on July 13 with no live audience, zero-contact teams and insurance for all

Trust the decision of banning some apps by the GOI, in the best interest of our country's security, besides Social Media addiction and Mental health are known enemies .. Just a break from them may help detox and introspect!! #BanTikTokInIndia #BanTiktok #dataprotection https://t.co/KlHi3Hq1YJ

On the other hand, Richa Chadha, Vishal Dadlani questioned the government’s ban. Check out their tweets below.

Banning Apps is to China, what Taali/Diyas were to Coronavirus.

Renowned teacher and scientist Sonam Wangchuk has been asking people to uninstall TikTok and refrain from using Chinese goods for quite some time now. He had previously asked celebrities to lend support to his cause in the wake of growing border tensions between India and China.