Advertisement
HomeBOLLYWOODENTERTAINMENT NEWSSeveral filmmakers who shared condolence messages for Sushant Singh Rajput are the same people who 'replaced actresses who refused to sleep with them': Richa Chadha

Several filmmakers who shared condolence messages for Sushant Singh Rajput are the same people who 'replaced actresses who refused to sleep with them': Richa Chadha

Richa Chadha was recently slammed on Twitter for not posting any condolence wish for late actor Sushant Singh Rajput. After giving a befitting reply to the troll, Richa has now posted a blog on how while discussing mental health, nepotism became the primary talking point.

Richa shared her blog post on Twitter and captioned it as " ... Please read only if you are serious about change... with malice to none and love to all!." In her post, she addressed issues like privileges, insiders, outsiders, and nepotism. Apart from these issues, Richa also stated that filmmakers who were posting condolences messages for Sushant are the same who have replaced actresses.

“It is being said that the industry seems to be divided between ‘insiders’ and ‘outsiders’? In my opinion the Hindi film industry and it’s entire eco-system is only divided between kind and unkind people,” she wrote. Richa said that as an outsider, she feels, that the industry operates like a food chain. “In the brief time that I have spent here as the first person of my lineage, my assessment is that the industry operates like a food chain. People are scoundrels when they know they can get away with it. Those who are anguished today have themselves been cruel to their subordinates,” she wrote.

...
Please read only if you are serious about change... with malice to none and love to all ! https://t.co/dTWBlyjpin.

Recommended Read: And then they say our Bollywood stories are far from reality: Taapsee Pannu, Richa Chadha, Zeeshan Ayyub and others react to gangster Vikas Dubey's encounter

She continued, “There are insiders who can be kind and generous, and outsiders who are punitive egomaniacs. In the nascent phase of my career, I was often ‘cut to size’ by outsiders. It took me all my strength to recover from various forms of subtle sabotage. But this is not about me. The tragic part is that everyone here has experienced a version of this.”

Calling nepotism a hateful and nonsense argument, Richa said, “I don’t hate ‘star kids’,” she added. “Why are we expected to? If someone’s father is a star, they are born into that household the same as we are to our folks. Are you ashamed of your parents... This is a hateful and nonsense argument. I am a self-made person in this business. Will you tell my children to be ashamed of my struggle to reach where I have, for instance?”

Recalling a story from about a decade ago, involving Sushant, she continued, “Sushant and I started out by workshopping together in a theatre group. I was sharing a 700 sq ft apartment in Andheri West with a friend from Delhi. Sushant would pick me up on his bike and we would head to the rehearsal, for which I was grateful. I wasn’t poor or broke. But I can’t say money was not a consideration when I had to head out to do an ad audition for a skin brand. I would worry about my make up melting in the auto rickshaw before I even arrived. This was would NEVER happen with a ‘star-kid’, and if it does, they will be lauded for being humble enough to take the rickshaw in the first place. But I don’t resent their privilege.” 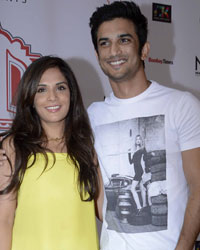 She wrote that “the thing with privilege is, it is invisible to those who have it. We cannot have a sincere discussion about equality before confronting entitlement. And it will not happen by blaming ‘the privileged’ for a man’s death or calling for actresses to be raped.”

Expressing disappointment at the hateful messages that have been sent to Sushant’s friends, she continued, “I am surprised by our collective lack of dismay or shock at how low we have stooped in our discourse. The social media timelines of the deceased actor’s friends and girlfriend are littered with filth! Who are these ‘fans’? I checked out a few profiles online. The same gutter mouths that abused Sushant when he took a stand on the ‘Padmavat’ issue are now abusing his loved ones for ‘not being there’ for him.” She noted that several filmmakers who shared condolence messages a month ago are the same people who “have run down movies of their peers pre-release, have replaced actresses who refused to sleep with them at the last minute and several have in fact repeatedly forecasted ‘iska kuch nahi hoga’.”