Rani Mukerji is all set to con you yet again with Saif Ali Khan, Siddhant Chaturvedi and Sharvari Wagh in her upcoming film Bunty Aur Babli 2. Just before the lockdown was announced in March, the team of Bunty Aur Babli 2 had wrapped up its Abu Dhabi schedule which included a major part of the filming.  However, a special song shoot was pending ever since. While the song was originally envisioned as an outdoor shoot, it was later reportrd that the makers will have to film it at the Yash Raj Film Studios, keeping the safety guidelines in mind amid the COVID-19 pandemic.

Now, it has been confirmed by director Varun Sharma that the film has been wrapped as the team shot for the song at YRF studios recently.  The director revealed that producer Aditya Chopra greenlit the stint only after he was satisfied with the precautions laid in place. "The entire cast and crew underwent a COVID-19 test before the shoot. During the week of filming, the actors practised self-isolation at home. The crew was quarantined in a hotel, with the studio arranging their transportation to and from the hotel. The drivers were tested and quarantined with the crew as well," said  Varun. 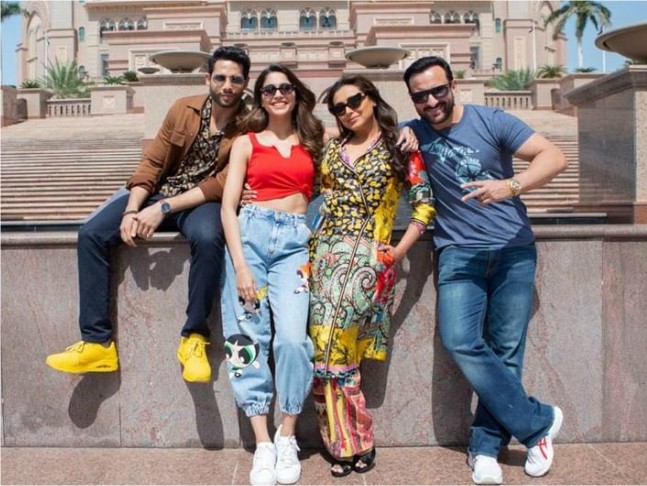 On filming in the 'new norma', Saif said, "These are highly sensitive times. Everyone on set has to be cautious because there is a risk element. I was amazed by the steps taken to ensure that we have a safe experience." Rani, on the other hand, said that she was eager to reunite with the team after the extensive Abu Dhabi schedule earlier in the year. "It brought back so many memories of us filming before the pandemic," she said.

Sharvari, who makes her Bollywood debut with the crime comedy, excitedly said, "There was no better way than a fun song shoot to bring the house down with positivity and joy." Siddhant said, "I'm glad we could have a safe shoot because of the steps adopted by the production house."