Ravi Kishan’s drugs conspiracy statements in Lok Sabha on Monday did not go down well with veteran actress and MP Jaya Bachchan who slammed him for his remarks today in the Parliament. She said, “I was really embarrassed and ashamed yesterday one of our members in the Lok Sabha, who is from the industry spoke against (I am not taking the name) the film industry. It is a shame 'jis thali mein khate hai usi me chhed karte hai', galat baat hai.”

However, Ravi responded to the senior actress’ jibe with utmost humility. Clarifying his remarks he said he was deeply hurt by Jaya’s statement and told a leading daily, “Jo Jaya ji ne bola I am quite hurt. It’s very wrong. I thought she would in fact support me. Her parliament session was at 9 am today and I thought she will say things like, ‘Let’s finish off the drug cartel, or catch who the peddlers are.’ My concern is that yeh drugs, koi fashion na bana de. Isi liye jo koi kar raha hai unko pakadna jaroori hai. That is why maine apne taraf se aawaz uthai. Usme mujhe support milna chiahiye tha, she is my senior, I have worked with her, she knows me, she always blesses me…ab pata nahi unhone aisa kyu kaha. I just want to tell her that nobody gave me a break ever! Mera koi godfather nahi hai. From Bhojpuri to Bollywood I had my own journey. I am a self-made man. I personally feel every industry mein drugs hai. Drugs are everywhere.. Few people from the industry might be doing it, but we must stop them. When I entered the industry in the 90s tabhi nahi tha, yeh sab last 10 years mein hua hai. We just have to bust the racket, raid the parties and bring an end to all this.” 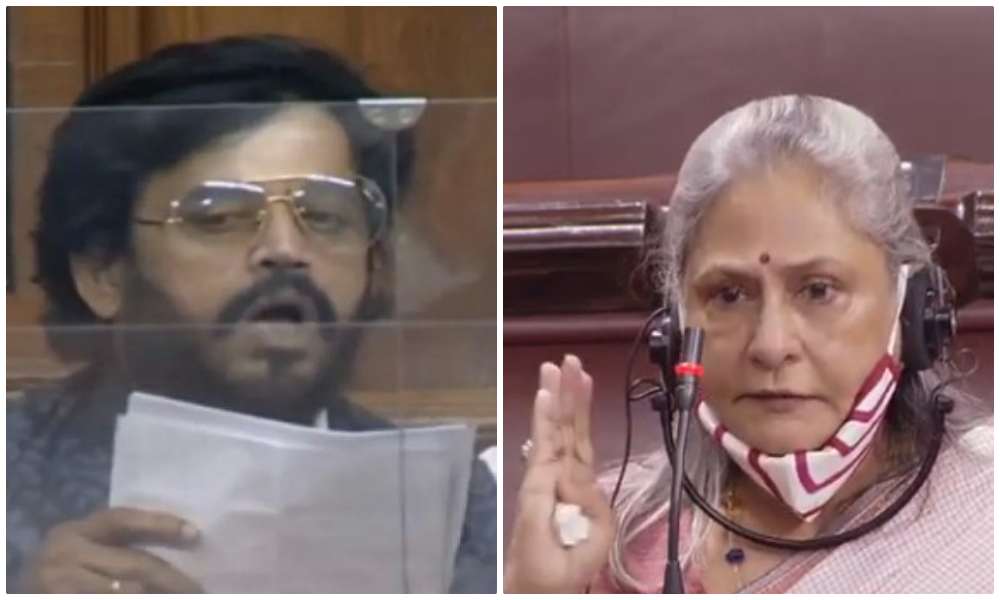 Jaya’s remarks in Parliament today regarding the attempts to defame the film industry did not go down well with the netizens. The entire Bachchan family was trolled today after the matriarch of the family took an indirect jibe at actor-politician Ravi Kishan who has claimed that drug addiction happens in the film industry as well as Kangana Ranaut. Since morning, the keyword ‘Bachchans’ started trending on Twitter along with #JayaBachchan, Jaya Ji, gutter and #istandwithravikishan as netizens slammed the veteran actress along with the rest of her family, for remaining silent on major issues like Palghar Sadhus lynching and Sushant Singh Rajput's death among others. They also interpreted Jaya Bachchan's Rajya Sabha speech as an attempt to protect drug addicts of the film industry.

Netizens shared an old video of Abhishek Bachchan talking about the menace of drugs in the society.  Check out some tweets from the netizens slamming the Bachchans below.

The dual character of the Bachchan family has been revealed #AmitabhBachchan #jayabachchan
Bollywood work under an agenda...

Kangana had already said that these people are going to follow her.... #KangnaRanaut pic.twitter.com/Wov106kCfq

The Bachchans are total dodos in terms of using their social influence! Absolute waste!

I've never seen this cowardly family taking a stand against any injustice before this. But ofcourse, they will come out asking for "protection" for bullywood's drug cartel.#JayaBachchan https://t.co/fHeUsX2Bcp

On the other hand, Bollywood celebs stood by Jaya for her speech. Sonam Kapoor, Taapsee Pannu, Farhan Akhtar, Anubhav Sinha, Producers Guild of India and several others came out in her support. Check out their tweets below:

The Producers Guild of India applauds Jaya ji for standing up for our industry #Respect pic.twitter.com/jcSY8tQouY

I want to be her when I grow up.. https://t.co/gXMBGu1ifA

Respect. She has always stood up to be counted when it mattered. #JayaBachchan https://t.co/KCCKIOqCLw

For we have always stood by the initiatives, causes and awareness campaigns. It’s time for payback. Hitting the nail on its head and how ! yet again a woman from the industry spoke up #Respect https://t.co/CVz1cTlCNw

Meanwhile, Kangana called out Jaya for her remarks against people who are trying to tarnish the image of the film industry, and questioned whether her stance would change if her children were involved. Kangana challenged Jaya and asked whether her stance would be the same if in her place it was her daughter Shweta Bachchan who was beaten, drugged and molested as a teenager. She further asked if Jaya would say the same thing if her son Abhishek Bachchan complained of being harassed and bullied.

In a series of tweets Kangana slammed the harassment and improper working hours of the industry.