'Too exciting a game for a pregnant lady,' quips Anushka Sharma as Virat Kohli's RCB wins IPL match in superover

Amid the pandemic, fans of cricket are glued to their phones and television screens as the much-awaited Indian Premier League is turning out to be a thrilling one this season. On Monday, the Virat Kohli-led Royal Challengers Bangalore and Rohit Sharma-led Mumbai Indians had a face-off at the Dubai International Stadium. In a nail-biting match that extended till the Super Over, Virat's team emerged victorious after the captain hit a boundary in the very last ball.

Soon after the match ended, Virat's wife, actress Anushka Sharma couldn't hold back her excitement and cheered for her husband's team on social media. Anushka, who is expecting her first child with Virat, shared a picture on Instagram and wrote, "Phew! Too exciting a game for a pregnant lady! What a team this one!" 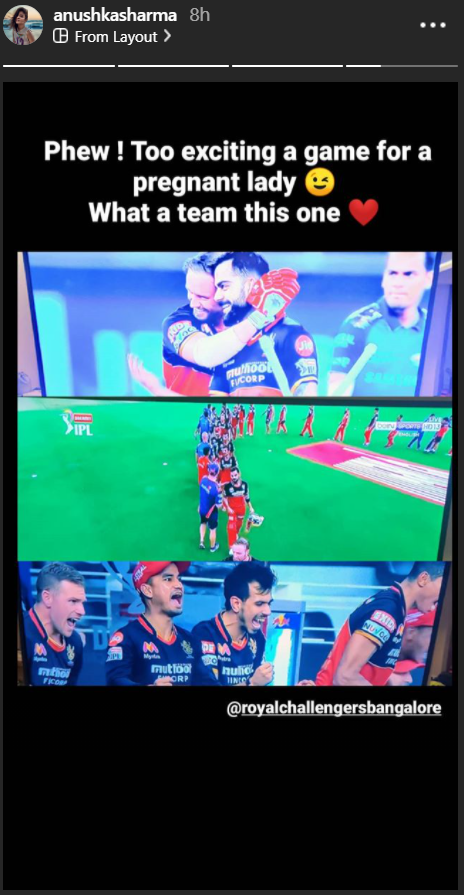 Recommended Read: Never blamed Anushka Sharma nor made any sexist comment: Sunil Gavaskar on his ‘bowling’ remark on Virat Kohli

After the previous match played by RCB, legendary cricketer Sunil Gavaskar was called for making sexist remarks on Anushka and Virat for the latter's poor performance. Anushka, in a note on Instagram, slammed him for not having an equal respect for all and questioned that when will people stop dragging her into cricket and blame her for her husband's failure. Gavaskar, in a statement, put forth his stand that he never made a sexist comment.