Advertisement
HomeBOLLYWOODENTERTAINMENT NEWSAs we said it! Telugu actor Bellamkonda Sai Sreenivas gears up for his Bollywood debut with Chatrapathi remake, calls it a 'perfect script'

As we said it! Telugu actor Bellamkonda Sai Sreenivas gears up for his Bollywood debut with Chatrapathi remake, calls it a 'perfect script'

One of the most talented and successful actors in the Telugu film industry, Bellamkonda Sai Sreenivas is ready for his Bollywood debut. In fact, he has chosen a grand vehicle and is ready to step into Bahubali fame Prabhas’ shoes and will star in a remake of SS Rajamouli directed, Chatrapathi. Pen Studios's Dr. Jayantilal Gada is bankrolling this project for Bollywood and has signed Bellamkonda already.  Bellamkonda Sreenivas has become a name to reckon with in Tollywood in a short time and his films on YouTube are breaking the internet. Bellamkonda debuted in 2014 with a superhit action entertainer Alludu Seenu and skyrocketed to fame thereafter. The hard-working actor has now trained his eyes on Bollywood. Pen Studios and Dr. Jayantilal Gada has been a name behind many successful commercial ventures that were high on content too. These two forces coming together will definitely translate into a great project.

Talking about the project Dr. Jayantilal Gada, MD & Chairman of Pen Studios said “Chatrapathi is a great script and we needed a southern star to carry it to Bollywood, and we saw Bellamkonda as a perfect fit. We are very excited about this project, and everything is falling in place at a great speed. We have updated the script to match Bollywood sensibilities.” 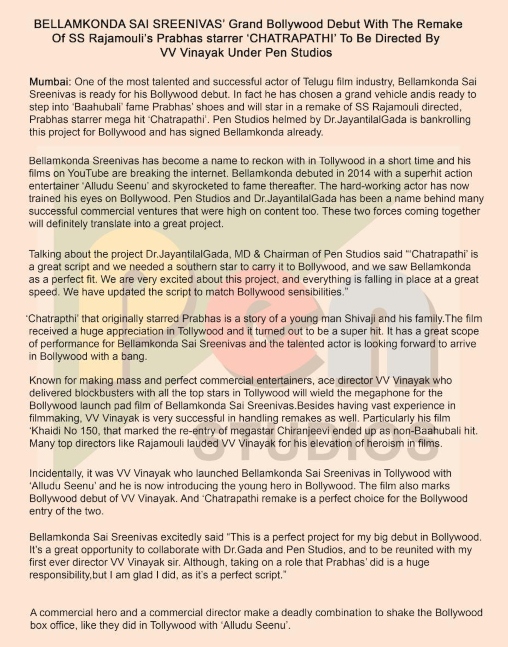 Chatrapathi that originally starred Prabhas is a story of a young man Shivaji and his family. The film received a huge appreciation in Tollywood and it turned out to be a super hit. It has a great scope of performance for Bellamkonda Sai Sreenivas and the talented actor is looking forward to arriving in Bollywood with a bang. Known for making mass and perfect commercial entertainers, ace director VV Vinayak who delivered blockbusters with all the top stars in Tollywood will wield the megaphone for the Bollywood launchpad film of Bellamkonda Sai Sreenivas. Besides having vast experience in filmmaking, VV Vinayak is very successful in handling remakes as well. Particularly his film Khaidi No 150, which marked the re-entry of megastar Chiranjeevi ended up as a non-Bahubali hit. Many top directors like Rajamouli lauded VV Vinayak for his elevation of heroism in films.

Incidentally, it was VV Vinayak who launched Bellamkonda Sai Sreenivas in Tollywood with Alludu Seenu and he is now introducing the young hero in Bollywood. The film also marks the Bollywood debut of VV Vinayak. And Chatrapathi remake is a perfect choice for the Bollywood entry of the two.

Bellamkonda Sai Sreenivas excitedly said, “This is a perfect project for my big debut in Bollywood. It’s a great opportunity to collaborate with Dr. Gada and Pen Studios, and to be reunited with my first ever director VV Vinayak sir. Although, taking on a role that Prabhas’ did is a huge responsibility, but I am glad I did, as it’s a perfect script.”

A commercial hero and a commercial director make a deadly combination to shake the Bollywood box office as they did in Tollywood with Alludu Seenu.