"No please don't do rumours behave yourselves guys," Varun tweeted with the link. 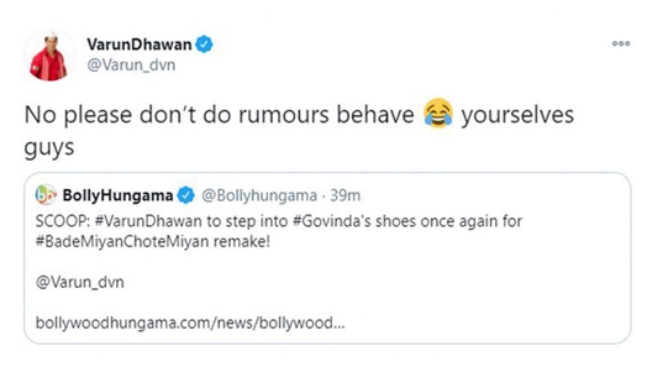 The actor is quite active on social media. Earlier, he took to Twitter to refute rumours of him being the first choice for the web series, Scam 1992: The Harshad Mehta Story, and also to deny rumours of his Roka with longtime girlfriend Natasha Dalal. Meanwhile, on Monday, Varun confirmed that he has contracted the novel coronavirus while shooting for a project. He said his spirits are high and he is taking each day at a time.

"So as I returned to work in the pandemic era I have contracted covid-19," he wrote on Instagram. "All precautions were taken by the production but still nothing is certain in life especially not covid-19. So please be extra careful I believe I could have been more careful. I see the get well soon messages and my spirits are high taking each day at a time... thank u," the actor added.

Varun was shooting in Chandigarh for Raj Mehta's upcoming film Jug Jugg Jeeyo when he contracted the virus.