Advertisement
HomeBOLLYWOODENTERTAINMENT NEWSHave shared my experiences during the coronavirus lockdown in my memoir ‘I Am No Messiah’: Sonu Sood on his bestseller

Have shared my experiences during the coronavirus lockdown in my memoir ‘I Am No Messiah’: Sonu Sood on his bestseller

The love and warmth that the actor Sonu Sood has been getting this year is remarkable. His hardwork and dedication particularly in sending lakhs of migrants to their homes during the lockdown has won hearts of millions of Indians. No wonder this year he has been recognised as the “Man of the Year” by HT, The Week, GQ India, and several others. Fans have built a temple in his name and are seeing him as the saviour, a Messiah. But Sonu strongly believes, “He is No Messiah”. He is a man with a clear heart and good intention. Sonu’s memoirs which was released recently is being well received by readers from across India. A number people whose life Sonu has touched, NGOs and various institutions are coming on board to support the book.

Sonu says, “While 2020 has been a challenging year in many ways, it has offered me an opportunity to reach out to millions of people and connect with them directly. During the course of this journey, I have learnt and gained a lot from them. I have shared my experiences in my memoirs I Am No Messiah, and it is heartening to see the support the book is receiving not just from book readers but various organisations and institutes who truly believe in our efforts to help people during these difficult times.” 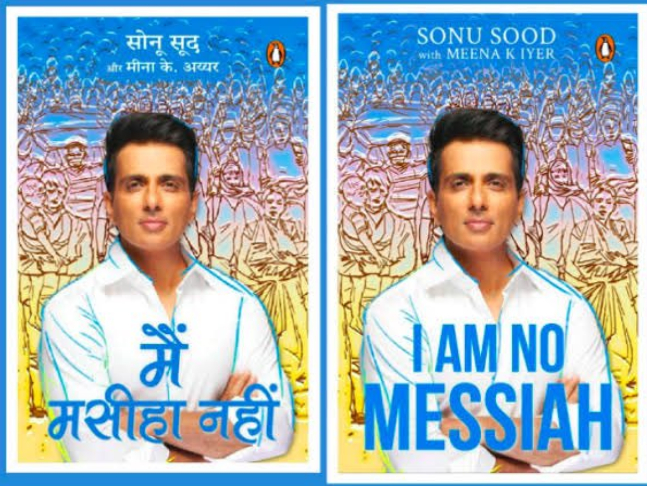 Sometimes, a little nudge from the universe pushes one to find his raison d'etre in life. If actor Sonu Sood had given in to the celebrity syndrome of sitting in his ivory tower and expressing his generosity by remote control, he would have never come face to face with the trauma of India's migrant labourers or understood that a food packet was a woefully inadequate substitute for a ride back home.

During the nationwide lockdown, imposed in the wake of the COVID-19 pandemic, when a wave of poverty-stricken migrants set out on foot to make their arduous journey back home, the value of seva, service to mankind, instilled in him by his parents, spurred Sonu Sood into action. From taking to the streets and reaching out to the stranded, to setting up a dedicated team and making arrangements for national and international transport, Sonu managed to help thousands of helpless and needy workers. Thus, began his 'Ghar Bhejo' programme, carried out like a humanitarian mission. Chartered flights, buses and trains were sanitized and paid for. Distress calls from all over the world were answered. Soon, the movement snowballed into a campaign for providing jobs, medical facilities and educational aid to workers. The silver-screen villain transitioned into a real-life superhero.

In his memoir, I Am No Messiah, Sonu Sood combines the extraordinary experiences of his journey from Moga to Mumbai with the writing skills of veteran journalist and author Meena K. Iyer. Honest, inspirational and heart-warming, this is the story of Sonu Sood and of the people whose lives he continues to transform.