Advertisement
HomeBOLLYWOODENTERTAINMENT NEWSAlia Bhatt poses with 'Ranbir Kapoor by her side' on her Rajasthan trip, says 'to whatever lies ahead of us'

Alia Bhatt poses with 'Ranbir Kapoor by her side' on her Rajasthan trip, says 'to whatever lies ahead of us'

Bollywood celebrities are in their New Years' mood already and on Tuesday Ranveer Singh, Deepika Padukone, Ranbir Kapoor and Alia Bhatt jetted off to Rajasthan. On Tuesday night, Ranbir's mother, veteran actor Neetu Kapoor shared a selfie with Ranbir and Ranveer on Instagram. Soon after, several inside photos of the Kapoors and Bhatts went viral.

Now, Alia Bhatt has posted a few photos on her Instagram stories and profile. One of the photos shows Ranbir casually photobombing Alia's photo. The actress posted a picture from the bonfire party and wrote, "& to whatever lies ahead of us.. cheers! ". Ranbir is seen sitting on a chair behind, looking away in the same photo. Fans soon noticed RK and wrote, "one photo with him please", another one wrote "RK by her side, always".

Recommended Read: Inside Alia Bhatt’s and Ranbir Kapoor’s vacation with their families in Rajasthan

She also shared a short animation of herself, sitting near a bonfire, surrounded by cartoon bears. The couple is joined by their mothers -- Neetu Kapoor and Soni Razdan -- and Ranbir’s sister, Riddhima Kapoor Sahni, her husband, Bharat, and their daughter, Samara. Alia's sister Shaheen Bhatt also joined them on the trip. 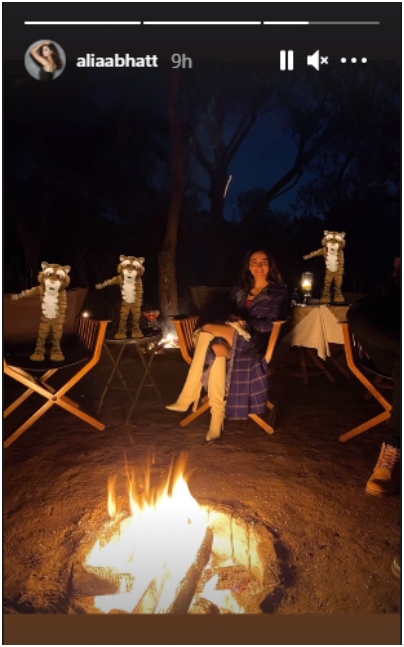 Well, the trip has definitely given Ranbir's and Alia's fans a reason to speculate about their wedding. Ranbir and Alia’s fans are wondering if they are in Jaipur for a sneaky destination wedding. However, Ranbir's uncle Randhir Kapoor soon dismissed the rumours yesterday and said they are there just to ring in New Years.