Advertisement
HomeBOLLYWOODENTERTAINMENT NEWSGovinda sends good wishes to Varun Dhawan and Natasha Dalal on their wedding, acknowledges David Dhawan’s card despite fallout with him

Govinda sends good wishes to Varun Dhawan and Natasha Dalal on their wedding, acknowledges David Dhawan’s card despite fallout with him

It is rightly said that kids mend differences between adults, and in this case the kid in question is our young Turk Varun Dhawan. Varun’s wedding to Natasha Dalal on January 24, 2021, has seemingly mend the fallout between his father, filmmaker David Dhawan and Govinda. On Saturday, Govinda posted a picture on his Instagram Stories, which showed a note sent to him by the Dhawan family.

The note read, "We tied the knot on 24-1-21 in an intimate ceremony with family and we missed you. To a wonderful beginning for Natasha and Varun. Thank you for your blessings. Laali and David Dhawan, Jaanvi and Rohit Dhawan." 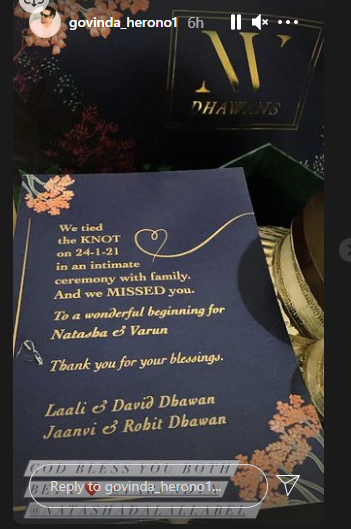 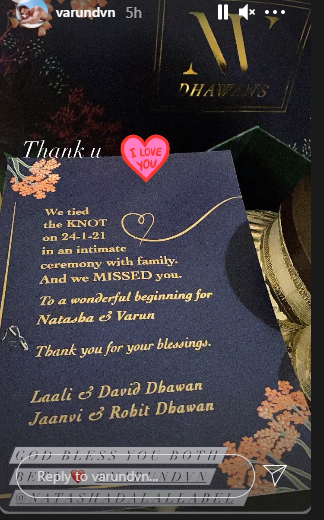 Govinda shared the picture of the note along with the goodies that were sent to him and wrote, “'God bless you both beta @varundvn @natashadalalabel." Varun reposted the picture on his own Instagram Stories and wrote ‘Thank You’ and added an 'I Love You' sticker to it.

Govind and David had a public fallout after appearing in 17 films for him. The duo were a great hit in the 90s and gave one blockbuster film after another like Coolie No 1, Hero No.1, Dulhe Raja, Raja Babu, Aankhen etc. Recently, Varun starred in Coolie No.1 that was a remake of Govinda’s film.